The Adani Group wants to expand its coal operations by 800%. In Australia, they’re opening up one of the biggest untouched coal reserves on the planet, while expanding coal production in India and beyond. From Indonesia to Australia to India, Adani is under fire for land grabs and disregarding Indigenous rights. Sadly, this is the British Science Museum's new sponsor of the ‘Energy Revolution’ Gallery!

Leaders from indigenous communities in Australia, India and Indonesia, wrote to the museum to warn them that it's agreement with Adani is legitimising its “destructive coal expansion activities” and that “Indigenous communities in all these countries are experiencing land-grabs, repression, the destruction of sacred lands, pollution of air, land and water...”

In support of their letter, people gathered on the doorstep of the museum, with an advertising van playing a video message from the land defenders resisting Adani. Together with other groups, we are demanding the British Science Museum #DropAdani as a sponsor.

🗣 Add your voice by writing to the Science Museum now. Help us to convince them to drop Adani as a sponsor.

We heard leaders from the Hasdeo Forest under threat from Adani’s coal mining for a decade, Adivasi people who marched 300km to save their lands from an Adani coal mine in Chhattisgarh, Borneo on the doorstep of the massive Adani coal mine on Bunyu island, and Wangan and Jagalingou still fighting Adani’s destruction of their sacred territory.

👀 Want to hear their stories? Watch their film.

The man behind this all is Gautam Adani, the billionaire chairman and founder of the Adani Group. With a net worth estimated at US $74 billion, he is considered the second-richest man in India. One of our partners for the action, South Asia Solidarity Group have written about his rise to power and links with Narendra Modi:

"Narendra Modi became Chief Minister of Gujarat in 2001 using divisive Hindu nationalist rhetoric and a promise of modernity and development through neoliberal economic planning, working side by side with Gautam Adani and other powerful corporates. This period is marked, inevitably, by the State weakening labour power, fuelling xenophobia, fascism and violence, and exponentially rising inequality."

It’s abundantly clear, there’s no room for expansion of the fossil fuel industry. Over the last year with your support we have managed to convince insurers to no longer underwrite Adani's Australian mega mine. However, Adani is still looking to expand his corporate empire and is in desperate need of private finance. Sponsorship, one of the ways to clean the Adani brand and attract new finance and insurance.

Adani's mines are supported by the UK's finance industry - providing insurance and funding for it's devastating coal mines in Australia, India and beyond. For the past year, Coal Action Network has supported calls for Lloyd's of London to stop insuring Adani. While many companies have pulled out, Lloyd's continue to refuse to rule out underwriting the Adani mine.

🗣 Can you to join us on Twitter and Facebook, to take on the institutions enabling climate breakdown?

Across India, Adani is facing intense opposition for its 800% coal expansion, land grabs, and pollution, including from the Indian tribal Adivasi people who are resisting coal projects which threaten ancestral lands in the Hasdeo forests.

Now, Adani is looking to greenwash its name through sponsorship of a new ‘Energy Revolution’ Gallery at the British Science Museum. This is a blatant attempt to trick the British public and gain further support from bankers and insurance executive. Adani is looking to expand its corporate empire and is in desperate need of private finance to do so. We can all be part of cutting that off.

We're looking for people to join us on Twitter and Facebook to combat the lies and demand UK institutions help #StopAdani instead of enabling climate breakdown. Across the world, people are standing up to Adani and their backers. By signing up, you'll get text messages from us with more information on how you can get involved with on social media.

Purpose of the action:

This action has two purposes. Firstly, it's about reaching people we wouldn't normally, informing them about the role insurers are playing in the climate-destroying Adani coal mine. Secondly, it's about delivering a blow to the public image of these companies by bringing their star ratings crashing down.

How to add a Google review:

In order to review somewhere on Google, you will need a Google account. It’s free and easy; Google has a support page on how to do so here, but get in touch if you’d like some extra help. 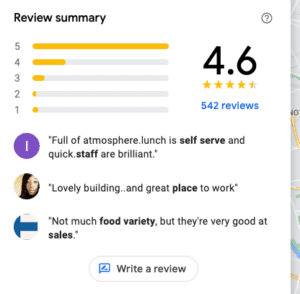 How to add a Google review:

Once you’ve finished your Google reviews, amplify them by sharing them - with friends, family, us, or on social media. 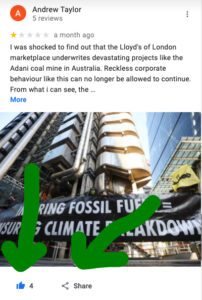 Our main target for this action is the Lloyd's of London in London. It currently has a a 4.6 star rating, and 553 review - bringing this rating down isn't going to be easy. If you're going to only review one place - make it this one. If we all work together, we'll be able to see that rating start to get lower and lower.

As you can only add one review per location on Google, we've made a short list of other targets. Done with these and want to keep going? Find your own targets by going on different websites insurers who haven't ruled out underwriting Adani. Here, they'll list their offices in other cities.