We’ve had some good news and some news

The extension proposed by Banks Group to the existing mine in the Pont Valley will be heard by the first remote planning hearing by Durham County Council on Wednesday 1st July at 9.30am. It is the second item on the agenda of the council, you can watch the proceedings live.

The council have refused applications on three occasions since the 1980s. The existing opencast was only approved after two planning inquiries.

Now there is no need for this coal. The proposal includes blasting rock within 500m of 150 residences and an arrogant assumption that Bank’s restoration will provide better wildlife habitats than those it seeks to destroy. For more details see our invite to object (although it is now too late to do so.) 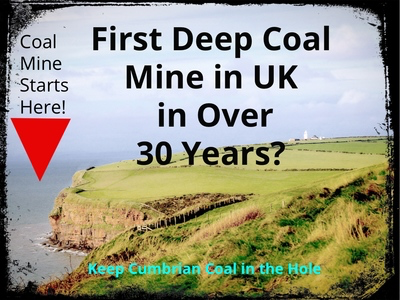 Cumbria County Council has delayed the planning hearing for the proposed Woodhouse Colliery coking coal mine off the coast of Whitehaven.

Cumbria County Council said, “Due to unprecedented numbers of representations being received on this application, including some received after the Consultation deadline and some that have contained new evidence, the Council has decided to postpone taking this application to the Development Control and Regulation Committee for a decision on 8th July in order to properly consider all representations and documentation received. The Council will now look to provide an alternative date. Please check our website on www.cumbria.gov.uk for further information”.

This is a result of all the concerned people who wrote to the council and brought up considerations which were missed or ignored when the application was approved in 2019.

The approval had been subjected to Judicial Review proceedings and as such was altered by the company, hence being returned to the planning committee.

A big thank you and well done to all those who put efforts into this, especially Marianne who brought the Judicial Review, the brilliant team at SLACC and many experts in the field who voiced that the mine is a bad idea.

We will keep you posted here and on social media of any updates.