Drax Plc who operate the biggest biomass power station in the world which is also one of the biggest coal power stations in the UK. It receives a shocking £1.5 million a day in ‘renewable energy’ subsidies paid via a surcharge on electricity bills.
On the day of Drax’s AGM (13/04/17) scores of campaigners across the country have protested against Drax Plc. Protests took place in London, York and Liverpool to highlight Drax’s involvement in dirty energy, its contributions to climate change, destruction of communities, deforestation, and its continued reliance on government subsidies – which should instead be going to support energy conservation and genuinely renewable energy.
In York, anti-coal and biomass protesters gathered outside the AGM for a colourful demonstration, with members of the local community, representatives of the Coal Action Network, Biofuelwatch and Frack Free York, and local councillors. If Drax was hoping to have less negative attention drawn to its AGM by doing it in York, it failed.
Andy Hiles, a local Selby councillor who attended the York protest, said “We’re appalled that these forms of dirty energy receive £1.5 million a day out of our bills, when that money could be going to genuine renewable energy like wind and solar, and to home insulation, which would also provide a lot of jobs. We’re also concerned by reports that workers at Drax are experiencing breathing problems from biomass.”
Anne Harris from the Coal Action Network, also at the York protest, said, “Indigenous Wayuu children [near the Cerrejon mine in Colombia, which supplies Drax] are dying as a result of mining coal to supply Drax power station. The dust affects their breathing, and water shortages due to the mine’s water consumption are leading to starvation. Drax needs to listen to the consumers of this energy and understand that coal is only clean when it is left in the ground. Drax and the UK government need to ditch coal now.”
In London, around 40 people gathered outside the offices of Drax’s two largest investors, Schroders and Investec, calling for divestment from dirty energy. 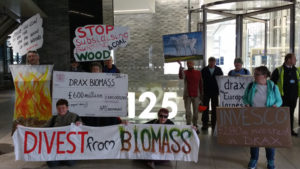 In Liverpool, local campaigners unfurled a banner at the entrance to Peel Port, saying “Biomass imports are a disaster, £1.5 million a day subsidy supports US deforestation”. Peel Ports import biomass into a specific terminal built to handle imported wood destined for Drax power station.
Katy Brown, who lives in Liverpool and attended the protest at the port, said, “We see trains leaving the port every day with ‘sustainable biomass’ written on them. Biomass that relies on imported wood from biodiverse ecosystems or from monoculture plantations is in no way sustainable.”
Coal is notoriously one of the worst fuels for the climate, but wood burning is coming under increasing scrutiny as a Chatham House report launched in February, ‘The Impacts of the Demand for Woody Biomass for Power and Heat on Climate and Forests’ revealed that its carbon emissions can equal those of coal. Drax imported nearly all the 13 million tonnes of wood it burnt last year, over half from biodiverse regions of the southern USA where many species are under threat from forest destruction.
Drax recently announced plans to build four new gas-fired power stations, which has angered anti-fracking campaigners. Local members of Unite Community also attended the protest to highlight the need for more green jobs and to raise concerns about local air pollution from Drax, which in 2013 was estimated to cause 590 premature deaths a year.
The  protests were organised by a coalition including Biofuelwatch, Coal Action Network, London Mining Network, Fuel Poverty Action and concerned locals in York and Liverpool.
Subscribe
Login
0 Comments
Inline Feedbacks
View all comments
wpDiscuz
0
0
Would love your thoughts, please comment.x
()
x
| Reply