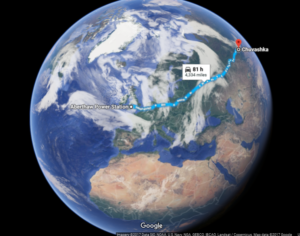 Over 4000miles from the Kuzbass to Aberthaw power station

Coal production around the world is falling. In the UK we have just seen three full days where no electricity was generated by coal, the longest period since the 1880s. Yet in Russia extraction of coal is increasing. Russia is the main country importing coal to the UK, supplying 49%.

This increase most affects the people living closest to the coalfields. In the Russian Kuzbass region this is the Shor, Teleut and Russian peoples. A new report from the Coal Action Network and Fern, Slow Death in Siberia shows the impact on these people. An additional supplement, Slow Death in Siberia – how the UK is complicit, shows how the UK’s government and utilities are complicit in the destruction.

Slow death in Siberia depicts entire villages being destroyed, mountains of coal ‘waste’ dominating the land and dust permeating everything. The indigenous Shor were dependent on wildlife for their subsistent way of life, sustainable over the generations.

Now vast opencast coal mines push them out of their territories and force them into a reliance on paid work often in the very coal mines which have destroyed their traditional ways of life and continues to damage their health. 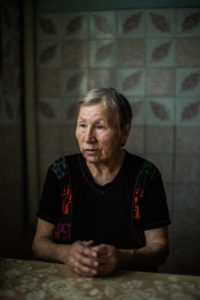 Larissa Myzhakova, a Shor person living in Chuvashka said, “Everyone is working in the mines. Shor and Russian, we all depend on mining to put food in our mouths, but at the same time they [the mines] are killing us.”

The UK burns more coal from Russia than from any other country, 49% of the coal consumed here.1 This makes the UK the world’s third biggest importer of Kuzbass coal importing 10.87 million tonnes in 2016. Colombia is the second biggest source of the coal imported to the UK.

The paramilitary violence and breathing difficulties caused by coal mining in Colombia has been well documented, but as yet the situation in Russia’s main mining region for export has received little attention. Following the Coal Action Network’s 2016 report, Ditch Coal, Vladimir Slivyak of Russia’s Ecodefense toured the UK speaking of the human and ecological disasters caused by our coal addition.

Late in 2017 I visited the Kuzbass region with Daria Andreeva from Fern, photographer Sally Low and translator Ekaterina S. to see first hand the impacts of coal mining on the indigenous people and the ecosystems they live within. Despite months of research into the situation in the Kuzbass, seeing it from the ground was heart breaking. 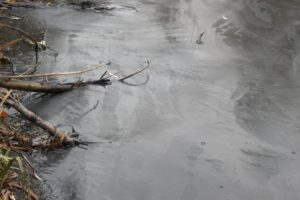 Larissa Myzhakova a native of Chuvashka, “Even three years ago I took my family to the Balshoy Kizas river, but now it has turned black [with coal dust and waste]. There is a lake where we used to swim, now I wouldn’t even touch the water, it is oily and so polluted from the coal which runs off the Kiyzasskiy mine.” 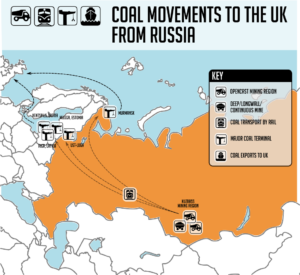 Our party focussed our research on the indigenous Shor village of Chuvashka, but visited enough other communities to see that what Chuvashka experienced was a common theme.

By comparison to UK opencast coal mines these mines are far wider, deeper and destroy more land as they are not backfilled, material which isn’t coal is piled by the mine edges and billows dust over the communities which it lies intentionally close to. The Kuzbass is not densely populated, but companies prefer to mine close to residential areas as it keeps costs down as existing utilities, labour and transport can be exploited.

The landscape in this part of the southern Kuzbass is forested, the taiga comes down to the village boundary and now to the edges of the opencasts. Imposing cedars and majestic silver birch once were king, but the cedar needs clean air and has died near the extractions. The taiga is in decline, its residents have retreated, dust fills the space once occupied by bird song. The river seems dead.

Larissa continues, “My children have decided to leave this place, our native lands, because of the very bad ecological situation. But I will remain here and won’t go anywhere. Why should we have to go to other lands? This is our territory. We are the indigenous people. What tree can survive without roots? If they destroy Chuvashka, what is our reason to live?” 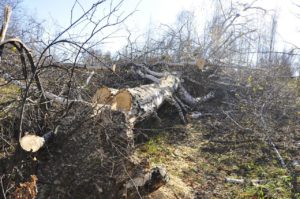 Logging the taiga by D. Andreeva

Coal Action Network’s research shows that the coal mined in the Kuzbass was likely to have been burnt in the UK’s biggest power station Drax; RWE npower’s Aberthaw power station and Uniper’s Ratcliffe on Soar power station in 2017, in other years EDF’s Cottam and West Burton power stations also burnt it.

There is no transparency of coal supply to the UK. Vostock Coal which operates Kiyzassky opencast mine and contaminates Chuvashka ignored requests to confirm whether its coal reaches the UK. 50% of Vostock Coal’s products are exported, to the “foreign markets of Western Europe and Asia- Pacific”. When asked only Aberthaw power station admitted to burning Kuzbass coal, including from CarboOne which exports coal from Balchasky opencast, the largest in the Southern Kuzbass.

The indigenous people living in Chuvashka were keen to speak with us so that people living far from their area, but consuming their coal resources could hear of their plight. Valentina Boriskina, a former school teacher lamented, “The Shors are children of nature, completely in tune with the land. We believe that the forests, rivers, mountains, plants and soil all have souls. But mining has destroyed all of this and so destroyed our culture. It feels like these souls have turned their backs on me.” 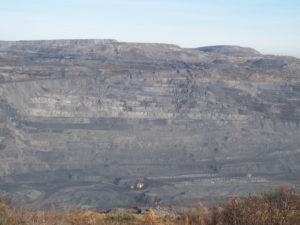 Russia leads the world in deforestation: between 2001 and 2016 the country lost more forest than any other – during this period it lost 49.51 million hectares of tree cover, followed by Brazil (46.37 million hectares), and Canada (36.01 million hectares). And in the taiga of southern Kuzbass, a major driver of this is coal mining.

The taiga here was a low density forest populated with cedar trees, birches, Siberian pines and larches. Wolverines, foxes, lynx, sable, brown bears, red deer and roe deer all ran wild, and the area was biologically diverse. It had been blessed with wetlands, streams and wide slow-moving rivers which are all being destroyed in the pursuit of coal. 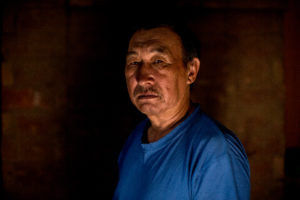 Valentina’s neighbour Alexander Myzhakov asks, “Where do we go? There is nowhere to go and so we keep going as before. Even if our livestock can’t live here we will stay and see how we can survive. I hope that the mining will stop, but hope eventually dies.” Alexander’s original village, Kruya was destroyed decades ago by opencast mining, now his current village is threatened with complete destruction following years of encroaching mines and a contaminated ecosystem.

Russia is the world’s third largest coal exporter. Since the bulk of Russia’s coal deposits lie in Kuzbass, the region is the epicentre of the industry’s current expansion. Kuzbass provides 59 per cent of Russia’s total coal output, and in 2017 coal production there rose by 6.2 per cent on the year before. Much of the coal produced in Kuzbass is destined for export with Europe, despite promises of coal phase-outs.

The price paid for this coal is high, several villages, including Kazas less than 3km from Chuvashka, have been destroyed. The community did not consent to leave Kazas, “People wanted to stay as that is where the cemetery is, where our dead lie,” explains Yana Tannagasheva who has since had to flea Europe as the threats and intimidation extended to her children and she has had to seek political asylum. Prior to this round of repression homes were burnt to the ground in Kazas, now surviving family members can only access the graves of their ancestors when the will of the armed guards protecting the opencast allow them to. 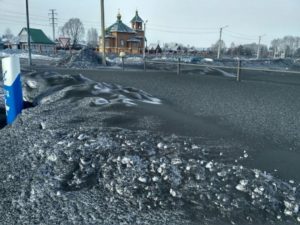 Sat in the homes of members of the community committed to slowing the spread of the opencast local people confide to us that they want all the mines to close. Publicly they are more pragmatic and say that they are asking for an end to coal exports out of Russia, as they are desperate for change and willing to risk everything for small improvements. They know Russia can’t possibly consume all of this coal.

“If the mining companies would listen I would tell them that the mines need to be closed down. The owners of the companies need to stop chasing the rouble and protect nature and people, not destroy it all by taking the resources. There is no deficit of coal, but there is a huge deficit of untouched nature, ecology and clean water,” pleads Shor villager Alexander Myzhakov. 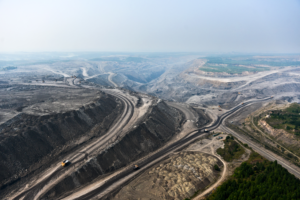 The UK government says that it will phase-out coal in 2025. That’s nearly another eight more years of coal, and unless something changes much of it will be coming from the Kuzbass. Several NGOs contributed to the UK phase-out consultation asking for action on the coal supply chain, but this was not included in the report concluding the consultation. Once again the human and local ecological issues of mining have been ignored in favour of international but no less dramatic climate impacts.

The people of the Kuzbass are not afraid to challenge the mining companies over the violations of their rights and land. They creatively protest in a country which tries to quell any alternative voices. Through Ecodefense’s work they are now networking and have incredibly managed in the last month to stop a new opencast coal mine to the North of Chuvashka. Planning permission had already been granted and the land owners territory was to be removed but lawyers have stopped the mine, giving hope to other communities.

Hannah Mowat, Fern’s campaign coordinator concludes “Destroying forests that billions of humans and creatures depend on is a travesty – but felling them for the coal beneath is even worse, and a double whammy for the climate. The EU has committed to ending deforestation by 2020, and has also committed to protect the rights of indigenous peoples. Yet here is a devastating example where EU consumption is felling forests, as well as their indigenous defenders for one of the dirtiest products on earth – coal”.

“To the people who ultimately consume the electricity produced I’d say use alternative energy sources and modern technology. I understand that energy is needed but there must be other ways than by opencast coal mining. Coal may be needed but the costs of exploiting it are too high and it is destroying people’s means of subsistence,” concludes Alexander Myzhakov.