This lunch time Santa and his helpers visited the offices of Banks Group in Meadowfield, Durham. Santa left ‘coal’ for Chairmen Harry Banks, as his company are considering mining 520,000 tonnes of coal from Bradley, near Dipton, County Durham [1]. 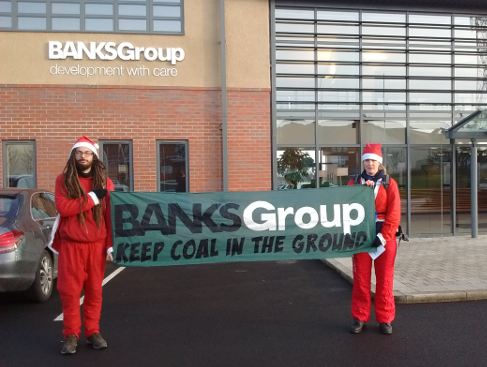 Lisa Wilson, one of Santa’s helpers said “Opencast coal mines destroy local ecosystems and contribute to catastrophic climate change. People living near the Bradley site have fought tirelessly against this application for over thirty years and hoped that the closure of UK coal combined with decreasing UK coal production meant that their area was safe. We are determined to stop any new UK coal mines from being started.” 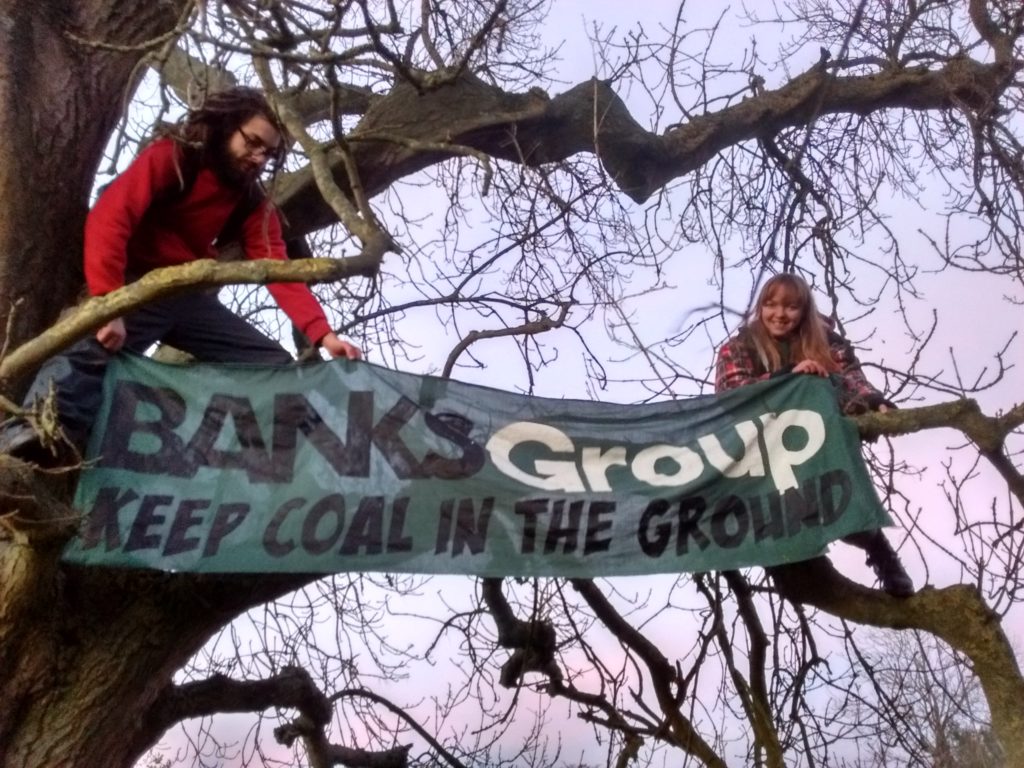 Durham County Council have said that Banks Group will decide in early January whether it will try to operate this site. Planning permission lapses on the 3rd June 2018. [2] Santa and his helpers vowed that this area will be protected.
Letters given out by Santa said, “I hope that your company will consider the local people who rejected this coal mine for over thirty years; remember the great crested newts, badgers, red kites, foxes, and the many other plants and creatures who know this land as home and contemplate the effect on the people living here who would lose their access to a much valued green space as well as being affected by the noise, light pollution, dust and traffic.” 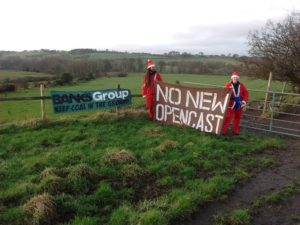 The UK Government first said it intended to phase-out coal in November 2015. No new opencast coal mines have started since that announcement.[3] The UK and Canadian governments are encouraging other countries to join them in the Powering Past Coal Alliance and move from coal to renewable energy. [4] A new coal mine starting soon would be deeply embarrassing for the Government as it would show that it is all talk and no action.

Last week Theresa May said, “by putting the UK at the forefront of efforts to cut carbon emissions and develop clean energy, we can also make the most of new economic opportunities. And by taking action to create a secure natural environment, we are fulfilling a duty we owe to the next generation.” [5] A new coal mine starting soon would be deeply embarrassing for the Government as it would show that it is all talk and no action.

[1] Tradition says that Santa leaves coal in the stockings of children who have been naught in the previous year.

[2] Three years after it was granted.

Banks Group operate two Northumberland opencast coal mines, Shotton and Brenkley Lane and are awaiting a decision from the Secretary of State for Communities, Sajid Javid on its application for a new six million ton mine at Highthorn close to Druridge Bay, Northumberland.
Bradley site history – UK Coal secured planning permission for the Bradley site. It liquidated in December 2015 after Kellingley, the last deep mine of significant size in the UK closed which belonged to the company. The application was subject to a planning hearing, two appeals and a High Court ruling before being approved.
Coal only produced 9% of the electricity consumed in 2016 and this year is likely to be much below this level.