Today Bank’s Group said that it “formally commenced mining operations at their new Bradley surface mine.” Suggesting that planning permission has been triggered.

Local residents saw that Banks Group started working this morning in Brooms Pond which is a nature conservation value at County level, qualifying as Pond Biodiversity Action Plan. Campaigners have been racing to stop Banks triggering planning permission and Banks Group has been competing to get there before the 3rd June cut off date. 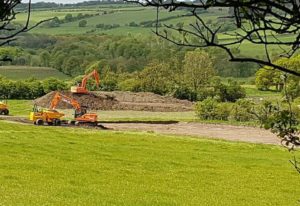 Tracy Gillman, who lives just 300m from the site boundary says, “Campaign to Protect Pont Valley know that there are significant anomalies in Banks’ procedures and processes in its reckless attempts to win coal from Pont Valley before its license runs out on the 3rd June. Today (18/05/17), Bank’s Mining released a statement saying that it has formally commenced the winning and working of minerals at its Bradley site in the Pont Valley, Durham.

The campaign against the opencast can still be won and this area protected. We will continue to take action and hold Banks Group and the relevant authorities to account.

As a local person I am appalled that Banks Group is disregarding our health, ignoring residents concerns about due process, damaging local biodiversity and that it is cutting corners to extract a fossil fuel which would push us over a dangerous two degree raise in global temperatures which has already triggered extreme weather events and international species loss. UK law says we have to reduce our reliance of fossil fuels and invest is sustainable alternatives.

The documents we have studied show that Banks has flouted rules and regulations clearly set out in the conditions of the approval. We do not believe that the commencement of planning has legally been triggered and we will continue our resistance.”

“The Durham Miners’ Association has opposed opencast mining for many decades and support the locally lead campaign to protect Pont Valley in Co. Durham.

It damaged deep mining in the past and now threatens to ruin our environment for no perceivable benefit.

Our communities have suffered enough with the decline of the coal industry and they do not need to have more injury added to insult.

There are deep mining projects reopening in various parts of England. So, there is little need to rip up the countryside to get coal.

We are still opposing and taking action against Banks Group’s destructive and divisive plans to destroy the Pont Valley for its own gain.”

Protests and actions continue against the opencast.