Today, residents of County Durham brought a 86,000 signature petition to Sajid Javid, Secretary of State for Housing, Communities and Local Government, to demand that he uses his powers under the Town and Country Planning Act to revoke permission for a new opencast coal mine, ‘Bradley’ in Dipton near Consett, due to start work within weeks. 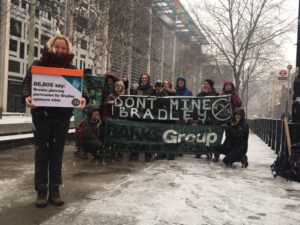 This January the mining company Banks Group announced their intention to open a new opencast coal mine in spring 2018. They acquired the site and the permit from UK Coal who liquidated in 2015.
June Davison, of Dipton village said ‘My community have been fighting the threat of opencast coal extraction for over 30 years. In that time we’ve won three public inquiries and three inspectors have agreed that protecting the Pont Valley is important. The government have revised their energy policy and plan to phase out coal fired power stations by 2025. Now in 2018 it makes no sense to subject such a beautiful area to the detrimental effects of opencasting. We ask the Secretary of State to listen to the thousands who have signed this petition in support of our campaign and overturn the planning permission.’ 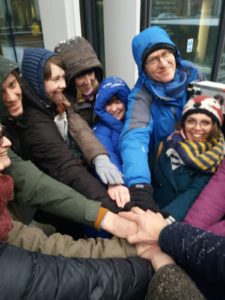 Uniting to fight and love together

`The petition was started by campaign group Coal Action Network with the campaigning website 38 Degrees, citing the government’s commitment to be an international leader in ‘Powering Past Coal’.
Scarlet Hall of the Coal Action Network said, ‘Today the government’s commitment to a coal phase-out will be tested. We know from our work with communities living near opencast all across the UK that these projects do not bring jobs to local people; instead they bring health problems and destroy much-loved natural habitats. So will Mr Javid do right by local communities, or will he rule in favour of big coal?’ 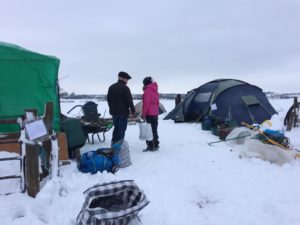 The same day, a land protection camp has emerged on the contested site in sub-zero temperatures, aiming to prevent the felling of trees by the mining company who seek to prepare the site for working within a matter of weeks. They are also there to monitor the planning permission constraints and report any breaches. The camp aims to delay Banks’ work until June 3rd when the permit will expire if work has not begun.
Julia Triston, another local resident said ‘We hope Sajid Javid does the right thing but since he continues to ignore us we have to find other ways of defending the site. My neighbours and I fully stand with the land defenders and will do whatever we can to sustain the camp. We’ve been bringing soup and blankets!’
So far the ‘land protection camp’ consists of home-made tree houses in the last remaining tree which blocks Banks proposed access road to the mine. The protestors come from environmental action groups across the UK and Europe.
“We are setting up this camp to support the communities of Pont Valley in protecting this beautiful countryside from opencast extraction. We have been met with warm hospitality from locals to help us create the camp in these arctic conditions. Whilst we have had fun in the snow, the phenomenal weather is a reminder of how our reliance on fossil fuels directly leads to catastrophic climate change, harming local communities and ecosystems worldwide.” said Pat, one of the land defenders.
Within days Mr Javid is expected to announce his decision about whether to halt another of Banks’ opencast coal project, Druridge Bay in Northumberland. Last week, Friends of the Earth claimed Javid would be ‘torching this government’s green credentials’ by failing to intervene.
Last month the Secretary of State received a letters by local residents and organisations and from the constituency MP Laura Pidcock appealing to him to revoke the permit for the Bradley mine. He is yet to comment.
ENDS
Notes to editors