Pickets against coal mining in Kuzbass

Today, March 13, Ecodefense and Fridays for Future hold a protest rally in Novokuznetsk against coal mining. One of the protesters was detained and spent half an hour at the police station. 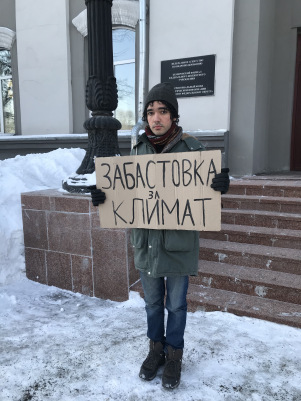 Vladimir Slivyak and Arshak Makichan stood in solitary pickets at the entrance to the federal subsoil use agency, which issues licenses for coal mining. Protests with more than one person are ilegal in Russia, hence the size of the actions. Many people living in the area are against the destruction caused by mining in the region.
After Vladimir Slivyak was released, the police rushed to the hotel, where they were staying with other participants in a press tour organized by the Environmental Protection.

Kuzbass, or the Kuznetsk coal basin, is the largest coal basin in Russia, which accounts for 59% of all coal production. Almost 200 million are mined annually, more than during the USSR, which covered a greater area of land than Russia alone does today.

Russia is the biggest exporter to the UK, supplying 37% of coal consumed in both UK power stations and steel making for in 2018, this is predominantly from the Kuzbass region. Coal imports to the UK are failing. Total coal imports in the third quarter of 2019 were 40% lower than in the same period in 2018. This was the lowest value on record.

– life expectancy in the region is 3-4 years lower than the average for Russia,

– the incidence of tuberculosis is two times greater,

– indicators for 15 cancers are higher than for Russia, including skin and lung cancer,

– there is an increase in occupational diseases.

Environmental protection states: open-pit coal mining has led to a catastrophic situation in the Kuzbass:

Kuzbass is located in a lowland, so atmospheric pollution does not dissipate and chemical smog forms. In the atmosphere of large cities, increased concentrations of formaldehyde, benzapyrene, nitrogen and carbon oxides, nitrites, nitrates, sulphur, coal dust. When the level of pollution increases, especially in foggy weather, the “black sky” regime is announced in Kemerovo, Novokuznetsk and other cities in the region.

Environmental protection believes that the living conditions of the population are deteriorating, and local residents are severely oppressed:

– only 3 out of 100 people live in satisfactory conditions,

– 80% of the population live near direct coal mining,

– sanitary protection zones around coal mines are reduced from the legal 1000 m to 400 m,

– as a result of explosions during coal mining, houses, stoves, farm buildings are destroyed,

– when new coal mines start local residents are forcibly expelled from their homes,

– protests are severely suppressed: in the villages they can turn off the electricity, close schools, cases of arson of houses have been registered, people receive threats, are illegally detained and prosecuted by the police.

Environmental protection claims that organized protests by activists provoke repression by the state, and the criminal prosecution of Ecodenfense is one of the most striking examples.

Environmental protection declares: in the context of global climate change and the trend of abandoning fossil fuels, the Russian state is not doing anything to prepare the population of the coal-mining region for the time when coal is no longer needed.