Opencast invader found not guilty in court, yet Hargreaves face no discipline over permission failures

Today one person was found not guilty of ‘Assault by Battery’ by a judge at Peterlee Magistrates court. The assault was alleged to have been inflicted on a security guard at Hargreave’s Field House opencast, which lies between the villages of West Rainton and Pittington, Durham. During an Earth First! action at the opencast in August. In court the security guard’s statement was inconsistent with his oral testimony. In reality the security guards were being overly heavy handed.

On August 19th 2019, 50 people from Earth First! shut down Hargreaves’ Field House opencast coal mine, for the day. This day of action was the last day of the Earth First! summer gathering which took place close to the site. 13 people were arrested for a mixture of aggravated trespass, criminal damage or assault charges. All other charges were dropped before coming before a court.  The opencast operation was shut for the day to support the neighbouring community whose homes are covered in dust from the opencast and in protest to the environmental destruction of the coal industry.

On the same day four people blocked the entrance to Banks’ Shotton opencast to directly disrupt the activity of the last English coal company trying to open new opencast coal mines. Banks Group has applied for permission to extend its opencast into an area Banks call West Bradley, on the Leadgate side of the current site.

Hargreaves are violating the terms of the planning permission at Field House. There are various conditions of the Field House Appeal Decision document, a legal contract, which have been contradicted for example:

1. “The Dust Action Plan shall be reviewed at six-monthly intervals and the latest version adhered to at all times.” This hasn’t happened.

2. “Coal and fireclay stockpile heights would not exceed 4m in height.” The site boundary with Robin Lane has a 6m high fence. On numerous occasions in 2019 the stockpile has been photographed at being higher than this. [ Point 51, page 51, and Point 24, page 6, Appeal Decision, John Woolcock, Planning Inspectorate, 5th January 2016.]

Susan Elliott says, “I live close to Hargreave’s Field House opencast coal mine. Hargreaves do not have planning permission to use the sizer to crush coal coal, are stockpiling coal higher than 4 meters, and have failed to revise the Dust Action Plan at the agreed 6 monthly intervals. Durham County Council have failed to enforce the planning permission, as the Minerals planning Authority failed to enforce the lack of planning permission for the sizer for over 6 months, or the breach in planning conditions relating to the revisions of the Dust Action Plan for over a year. This isn’t acceptable. These planning breaches show that Hargreaves disregards the health and well being of people living in this area. Abiding by the conditions would mean less dust on our homes and in our lungs, but may have reduced the profits to Hagreaves. Durham County Council is failing to act, I’m grateful to Earth First! for their action against this mine and for highlighting the environmental problems.” 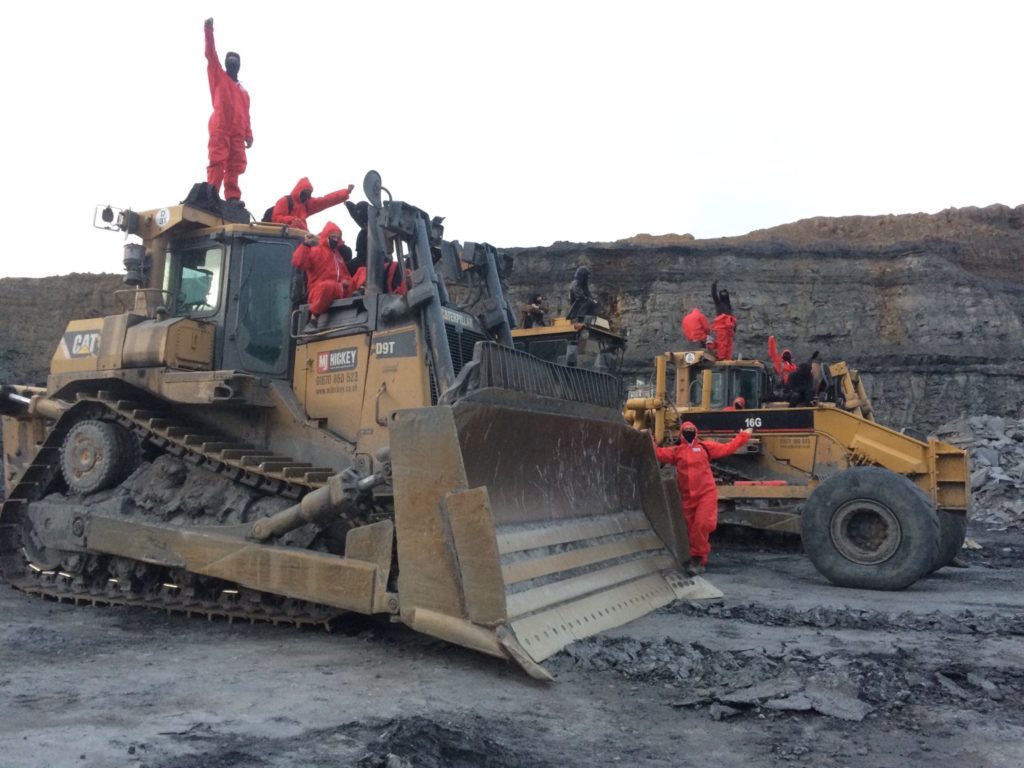 Dust is a problem because there are associated health problems. Air pollution in deep mines is well known to have caused health problems to the underground miners. Now people living close to coal opencasts are exposed to the same dangers. The British Lung Foundation says, “Fine particles (PM2.5) may reach the breathing sacs deep in your lungs… These particles can carry toxic chemicals which are linked to cancer. Particulate matter irritates your nose and throat and may be associated with more severe symptoms in people with asthma. It results in more people with lung conditions (COPD [chronic obstructive pulmonary disease], asthma, bronchitis) and heart conditions (heart attacks, strokes) being admitted to hospital. It also causes early deaths from lung and heart disease. There’s also evidence that long-term exposure to particulate matter can contribute to the development of lung cancer and possibly asthma.”

Hargreaves has been crushing coal close to the North/North West site boundary, within 300m of West Rainton homes and 700m of the West Rainton Primary School since February this year. As an additional source of dust emissions this would have required a revision of the Dust Action Plan. However it was only in November, almost 9 months later, that an additional dust monitor was located near this boundary, albeit on the other side of the A690. Dust emissions are not being properly monitored at Field House. PM 10 and PM 2.5 emissions are not being monitored as per the regulations. Due to failures with the instrument, between February 2019 to May 2019 only four days of PM 10 and 2.5 data were collected. Additionally data was missing for June and July, two of the driest months of the year.

Sam Jenkins who was part of the action said, “It is vital that we stand in solidarity with communities locally and globally that have their homelands colonized by opencast coal mines. Being in the Field House opencast it was clear that dust suppression was not a primary concern to Hargreaves. It’s safe to say with any area of land, you can never know how much wildlife is there and what will be affected by destroying any part of that ecosystem. Whole ecosystems are being completely torn apart by opencast extraction, an argument that gets little attention but this is an act of ignorance as we rely on these wildlife systems to have any sort of symbiotic future.”

Earth First! vows to continue to fight against opencast coal mines across the country.