A contentious land sculpture was brought to life today (30th May) as it joined growing opposition to a new opencast coal mine.

To mark the start of a public inquiry into the controversial Highthorn coal mine at Druridge Bay, a group calling themselves “Northumberlandia Speaks” used the power of art to give voice to Northumberlandia, a public sculpture in rural Northumberland.

Check out the action in this film with drone footage and interviews with those who took part.

The structure, also known as Slag Alice, was constructed by the Banks Group to compensate for the environmental damage caused by the adjoining Shotton Surface Mine. Many local people are angry at this crass sculpture, which is Bank’s version of ‘restoration’ rather than trying to replace the land to as close to before exploitation started as possible.

The mining company’s plans to mine coal near local beauty spot Druridge Bay have attracted widespread opposition, and today’s action vocalised that opposition. Much of this opposition has centred around the Save Druridge campaign, who have funded legal opposition to the mine.

The campaigners used a banner reading “end coal now” to suggest the views of the reclining woman depicted in the sculpture. They also constructed an image of a wind turbine in her clenched right hand. 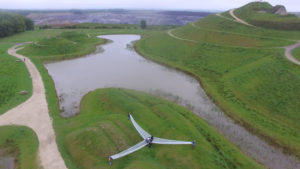 As well as the dangerous environmental impacts of a coal mine near Druridge Bay, campaigners and local residents are concerned about the threat to wildlife and the local tourism industry, which relies on Druridge Bay’s status as a natural beauty spot.

Although the Banks Group claims the new mine could create 50 jobs, it is unclear what would happen to these after the mine’s five-year lifespan. Local people say that at least this many jobs will be lost as a decline in tourism as a result of the mine.

Jack Marley, a local resident who participated in the protest, said, “I didn’t actually even know there was a new coal mine planned until recently. I don’t understand why anyone would want to open a new coal mine when it’s so obviously a declining industry. The North East has had a great coal-mining past, but it’s not an industry that can bring the growth to our area that we need so much. It makes much more sense to create local jobs in the renewable sector.”

Noyes added, “A new mine at Druridge Bay will create less than 50 short term jobs and bring a daily traffic of 300 HGV vehicles to a calm oasis. While we await the results of the inquiry, we can only reflect on what a beautiful place Northumberland is, at sites like this. Anyone who comes to the area can see how a new mine would completely destroy the bay, and why? So a dying industry can wreck our climate.”

The inquiry starts tomorrow, 31st May, and a final decision will be reached in the autumn. There is to be a public rally before the inquiry opens and at lunch time on the first day. For details see here.