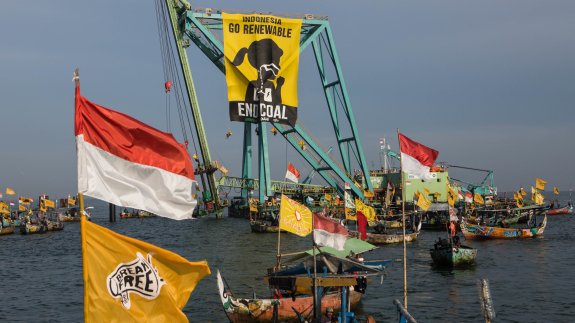 The activists, from green groups Greenpeace Indonesia, WALHI and Jatam, are demanding the Indonesian Government cancels the 2,000MW Batang coal power plant project and that the Japan Bank for International Co-operation (JBIC) withdraws its financial support.

Twelve of the environmentalists unfurled giant banners and occupied heavy equipment at the site, supported by a flotilla of about 100 local fishers who joined the blockade.

The action hopes to support local communities which have opposed the project for five years because of its impact on agricultural land and waters – they say the power won’t help them and will be used for industry.

Many of these people have taken legal action, participated in hearings with various government agencies and even sent representatives to Japan to directly meet with investors.

Arif Fiyanto, Energy Campaigner at Greenpeace Southeast Asia, said: “Not only will this coal plant destroy the local environment, it will pollute our air and contribute to the 6,500 premature deaths in Indonesia every year linked to air pollution from burning coal.

“Indonesia must break its addiction to fossil fuels and banks such as JBIC must stop financing dirty coal projects.”

Earlier this week in the UK, protestors blockaded a quarry owned by a fracking supplier in Lancashire.

Europe’s energy utilities have rung a death knell for coal, with a historic pledge that no new coal-fired plants will be built in the EU after 2020.

The surprise announcement was made at a press conference in Brussels on Wednesday, 442 years after the continent’s first pit was sunk by Sir George Bruce of Carnock, in Scotland.

National energy companies from every EU nation – except Poland and Greece – have signed up to the initiative, which will overhaul the bloc’s energy-generating future.

A press release from Eurelectric, which represents 3,500 utilities with a combined value of over €200bn, reaffirmed a pledge to deliver on the Paris climate agreement, and vowed a moratorium on new investments in coal plants after 2020.

“26 of 28 member states have stated that they will not invest in new coal plants after 2020” said Kristian Ruby, Eurelectric’s secretary-general. “History will judge this message we are bringing here today. It is a clear message that speaks for itself, and should be seen in close relation to the Paris agreement and our commitment to provide 100% carbon-neutral electricity by 2050.”

Read more of this article in the Guardian