Guilty of taking a stand 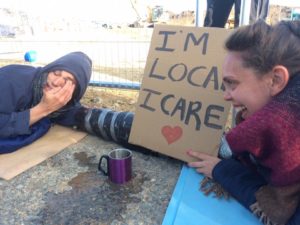 In total, the eight have to pay a staggering £8,323. We have launched a crowdfunder so that you can show your support of these principled people and help pay the penalty. The actions were part of the Campaign to Protect Pont Valley’s battle against Banks Group, the last company looking for approval for new opencast coal mines in the UK.

Judge Harrison dismissed the motivations of all of the defendants. She said she believed that their beliefs were strongly held but said that the reasons for their actions were not relevant to the legality of their behaviour. The trial itself was heard at the end of October.

Robyn Clogg who lives within 300m of the opencast said, “I wrote to the council, I signed petitions, I wrote to Banks Mining Group, I demonstrated at the side of the road and supported the protest camp. I wasn’t left with any other avenue to stop this destruction but putting myself physically in the way.” 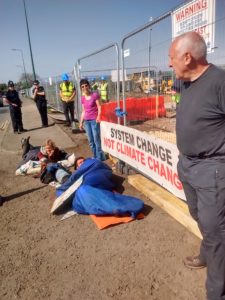 The convictions relate to four different occasions where concerned people took action to delay the completion of the access road to the opencast site. Its completion was supposed to happen before coal extraction could begin, as per the legally binding Section 106 agreement. By the time the planning permisision should have lapsed on the 4th June 2018 the road was not complete, nor about to be for several weeks. The Section 106 agreements document was used by Durham County Council during the two appeal inquiries in an attempt to pacify local people, who have expressed opposition to the opencast for over thirty years, that the conditions would protect them. The Council acknowledge that the agreement was broken but refuses to take enforcement action against the company.

“Banks Group are involved in a wildlife crime which needs to be stopped. The presence of Great Crested Newts in Brooms Pond, now destroyed, has long been included in the discussions why this opencast should never have been started and they were still present on the site, our actions were to protect them. I used to live in Durham, I have been involved in the planning meetings, I was an interested party in the planning appeal, I’ve signed petitions, emailed the council, written to my MP. Before now, everything I have done was part of the legal process and hasn’t achieved anything. A wildlife crime is being committed and planning agreements were being broken. If you see a mugging holding a sign won’t do anything, sometimes you have to physically intervene, you have to stop it,”
one of the people said in the dock who was sentenced today.

Banks Group failed to construct the access road prior to soil stripping, yet the council ignored the conditions on the coal company created to protect local people. Durham County Council is unable to keep the coal company in check. People who cared about the diverse, well used and beautiful area were left without an option but to take matters into their own hands and risk criminal records in order to try and protect the natural world.

It was a first offence for almost all of the people who were convicted. Additionally restraining orders were given, preventing those who were found guilty from entering the Bradley (Pont Valley) opencast or impeding the entrance to the site for twelve months.

In delivering her verdict the Judge said, “during the course of the trial I’ve permitted myself a wry smile, it was historically interesting that in the mid 1980s another group with strongly held beliefs similarly demonstrated and found themselves in front of the courts.” She clearly doesn’t know that Durham Miners Association stands with Campaign to Protect Pont Valley in its opposition to the Bradley opencast. Those who took this stand are aware of the actions of their grandfathers and have sufficient experience of the horrors of opencast coal mining to know that this devastation is not in the interest of the communities living close to the opencast and goes against the strong messages we are getting from the IPCC about the urgency of climate change. 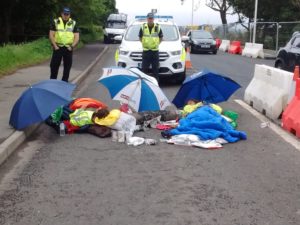 An earlier group of people were all acquitted of charges of aggravated trespass by Judge Cousins also of Middlesbrough Court, as the Crown Prosecution Service and Banks Group failed to show that the coal company was not breaking the law, in destroying the breeding pond of protected Great Crested Newts. Perversely given their innocence, they were given restraining orders excluding them from being within 300m of all Banks mining sites. Some of those sentenced today live within 300m of the site boundary.

Following from this first case, and using evidence based on it the Campaign to Protect Pont Valley are bringing a private prosecution against Banks Group for breaking regulation 43 of the Conservation of Habitats and Species Regulations 2017. The first hearing will be the 12th December.

If you would like to contribute to the fundraising efforts to pay these fines and costs go to https://chuffed.org/project/support-anti-coal-protectors Thank you