Earth First! Takes on Coal Mining in the North East of England

This is a reprint of the Earth First! press release:

Activists under the banner of Earth First! Take on Coal Mining in the North East of England Two Coal Mines Shut Down 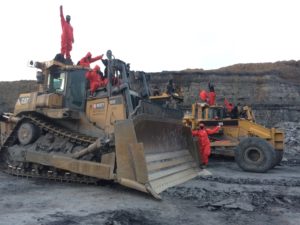 In the early hours of this morning, activists from the North East, around the UK and abroad entered and occupied machinery in Field House mine and blockaded Shotton mine to stop them from continuing to dig up coal, destroying the surrounding environment and contributing to the climate catastrophe.

Opencast coal mining is strongly resisted in the “desolate North”, an area that has become a sacrifice zone for continued economic growth at the cost of the global climate, local environment and community health. It supplies the UK’s dirty power stations, leading CO2 emitters, while people in the global South are suffering the consequences. Even in the UK we are starting to see the impacts of climate change such as flooding and the expected sea level rise will affect coastal areas around the country.

Field House opencast started in 2018 and is operated by Hargreaves. The exact destination or power stations that the coal is being transported to is unknown. Machinery inside the mine is occupied, despite violent attacks by security.

Coal provided just 5.3% of the electricity generated in the UK in 2018. Recent research by Friends of the Earth has shown that already, enough coal is held in stockpiles in the UK to last until 2025, the date by which the UK government has committed to phasing out coal.

Yet, it allows for continued extraction, expansion and even proposals for 2 new coal mines to go ahead.

Coal burning is not only one of the main contributors to climate change, but also destroys valuable habitat and impacts air quality where it is dug and where it is burnt. The Bradley mine in the Pont Valley, Durham for instance, violated European and UK nature conservation legislation by destroying Great Crested Newt habitat.

We need to stop importing coal, and we need to stop digging it up in the UK now. Fracking, biomass, gas and nuclear are not solutions either. Neither do we want large-scale, corporate-controlled renewable energy installations that rely on the mining of rare metals elsewhere to power industrial so-called “development”. Green capitalism is not the answer.

Instead, we have to work towards radically different, locally and communally controlled, off-grid solutions that involve the use of DIY technologies made with recycled materials. These solutions need to be coupled with a drastic reduction in energy consumption, and a wider, radical opposition to our capitalist plutocracy. Such systems can then be embedded in non-hierarchically organised sharing economies that operate according to principles of mutual aid and solidarity.

No compromise in defence of the earth!

The Durham coalfield has been a work place and source of energy since Roman times. At its height, this coalfield employed almost 250,000 mineworkers and their union was the lifeblood of their communities. Durham miners participated in the national strike for a year from March 1984 resisting the government’s plan to close more than 70 underground mines, (but only 20 closures were acknowledged at the time) in an effort to increase electricity production from imported coal, nuclear and gas and try to smash the power of the unions. Miners came together to fight against the pit closures and to support the families left in poverty as wages stopped coming in.

The last underground mine in the Durham closed in 1993, but the community culture born of the industry and collective resilience carries on. Now members of the same communities are fighting to stop the total ecological obliteration, noise, dust, heavy traffic, denial of access to natural spaces and community disempowerment that are opencast coal extraction.

Also nearby lies a site of continued strong opposition to coal by the Campaign to Protect Pont Valley who battle against Banks Group in their valley. Banks Group’s the only English company submitting plans to expand its coal extraction venture, with applications awaiting decisions to opencast Dewley Hill (outskirts of Newcastle) and at Druridge Bay (a stunning beach north of Newcastle). Banks wants to extend the opencast in the Pont Valley and could put in further extension applications at its two existing opencast sites in Northumberland.