“Druridge Bay is not theirs to take, but ours to keep.”

— Interim snap shot of the days the Coal Action Network has seen of the public inquiry into Banks Mining’s application to opencast mine at Druridge Bay. —
The public inquiry which will decide the future of Druridge Bay in Northumberland is reaching the end of its second week. Bank’s mining has presented its witnesses and Northumberland County Council have presented most of theirs.
Save Druridge‘s speakers today (Thursday 8th June) presented strong reasoning against the mine. Lynne spoke of the risk to vulnerable road users, cyclists, horse riders, tractors, motorcaravans and horse drawn vehicles.
Liz spoke of the risks on the A1068, which Banks lawyer tried to say was not used by cyclists for pleasure, but Liz countered this and the idea that cyclists shouldn’t have a choice of ways to travel. She showed that making this road more dangerous would affect off road access to many miles of land. 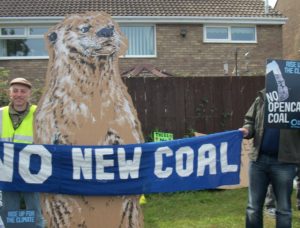 A local business owner, Neil who owns a caravan site very close to the site said:
“Peace and tranquillity will be gone for a significant amount of time [if the mine were to go ahead].”
Banks tried to convince him that their experts say there will be no noise or dust. Lies he clearly saw through. Saying that the potential of a mine was already damaging his family’s business.
From the Save Druridge witnesses we moved to independent evidence. The range of points of view, all opposing the application, was comprehensive. One contributed to the close relationship between Northumberland County Council and Banks Mining.
“A piece of my heart will always stay buried in the dunes,” said a Newcastle University student in a very moving and emotive statement.
A retired GP who used to work in Ashington said his house would have an uninterrupted view of the opencast if it was approved. At the moment, he can see the length of Druridge bay and the dunes. He is on beach everyday and in the dunes, when the tide is in. He said an opencast mine at the site would seriously impact his retirement.
Dr Richard Quimby said, “Better not to have dust at all when you don’t need to have it…
We don’t have to have an opencast there in the first place, it isn’t required. It is just taking that chance (with our health).”
Anne Harris from the Coal Action Network showed in our two submissions, that there is not a significant demand for coal, as of the eight power stations Eggborough and Uskmouth and converting to gas and biomass respectively, Drax want to convert to biomass (dependent on government funding), Fiddler’s Ferry burns little coal, EDF looks like it may close its two power stations as it has handed back two of its three year Capacity Market contracts; Aberthaw is to burn only imported coal, leaving only Ratcliffe as a potential user of this coal.
In the opening statements Banks said that they could pursue the none power station coal markets. However, with Ffos-y-fran, the UK’s largest coal mine, is no longer supplying Aberthaw it is looking to join Hargreaves’ last Scottish opencast mine in supplying the speciality coal market with a combination of 1 million tonnes of coal a year. There is only a small amount of demand for coal in Britain and an over supply.
Bank’s proposed benefits for the area, jobs and restoration were shown to be less than promised. 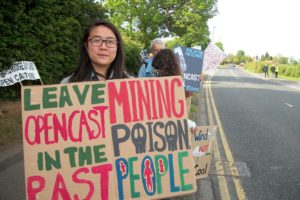 Another student speaking said: “I try not to invoke too much emotion in this speech, but I think our emotion is what brings most of us here today.”
She first highlighted the privilege we have of living in the global North, with the most basic of human needs being satisfied. This contrasted very well with the letter she read, from the Mfolozi Community Environmental Justice Organisation (MCEJO).
“Our community/organization also has first hand experience of the blasting, dust, water theft and other impacts of an opencast coal mining operation 10kms (6.2 miles away). We also are severely challenged by climate change as a result of South Africa’s reliance on fossil fuels, the worst being a severe seven year drought that resulted in many deaths of our livestock and even wildlife in the neighbouring Hluhluwe iMfolozi Park,” Billy Mzokhona Mnqondo, Co-Founder of MCEJO
The letter, co-ordinated by Yes to Life, No to Mining, calls on Northumberland County Council and UK planning authorities to reject UK-based Banks Mining’s proposed Highthorn Mine on the basis of its potential climate impacts. “The approval of a coal-fired power station in South Africa was recently rejected by our courts because the application had not considered the impacts of climate change. If Africa is taking cognizance of the reality of climate change, we call on the UK to do the same… We would not wish on anyone else what we have had to put up with ourselves.”
A few people discussed the need to reduce green house gas emissions, not only for future generations, but because the impacts are already being felt by people in our country in addition to the worse impacts felt abroad, particularly in low lying nations.

David Muller on behalf of Stephen Hemsley said:
“Sustainable development. Meeting the needs of the present without compromising the needs of the future to meet their own needs.” Clearly this isn’t the case with this application. Destroying the area by opencasting will damage the biodiversity and natural resources.
A speaker from Save Newcastle Wildlife said Banks are:
“Clutching at claims there will be no noise, no dust and no devastation.”
Banks were keen to say there would be no dust, but many of the witnesses strong rebuked this claim as wishful thinking.
In Bank’s work they have tried to claim that mining this coal will add to globally available stocks whilst displacing coal imported to the UK. An irrational line of argument destroyed by Friends of the Earth’s excellent legal team.
Bank’s lawyer has tried to say that the section 106 agreement, the planning obligations cannot be changed as there are too many interested parties. This is untrue, an inquiry needs to be able to vary conditions.
The inquiry is expected to run until Wednesday 21st June with a final decision later in the year.
Rachel, Save Newcastle Wildlife summaries well with, “We are not different from superior to or in charge of the natural environment… what we inflict on nature we inflict on ourselves… Coal is on the wrong side of history.”