Banks Group is looking to extract 800,000 tonnes of coal from Dewley Hill, on the outskirts of Newcastle.

On 20th February Banks announced they planned to submit an application imminently to Newcastle City Council.

The main information we have so far is from a preliminary planning notice was entered to Newcastle Council (this is the first part of the formal application). There has been some archaeological surveying done on the site in 2018.

Proposed operating hours 7am to 10pm, (longer than on some sites eg. Bradley in the Pont Valley).

Site access: B6323, Ponteland Road, lorries are expected to travel East on the A69 when leaving

So far only a scoping report has been submitted to the council. This is the preliminary notification containing the information on the broad plans and the further surveys required to submit a planning application. This was submitted in 2016, when the intention was to commence in 2018. 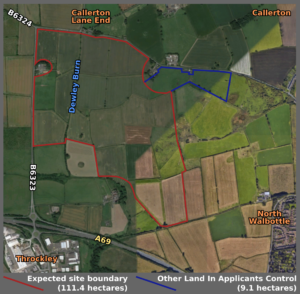 The exact layout of the opencast proposed is not known as it is not listed in the scoping report. The area on this map is the area to be studied for archeological sites, ecology etc, the opencast will not be larger, but it could take up a smaller area.

History of the site

Two previous planning applications for this site were rejected; one in 1994 and one in 1999, which was rejected on appeal.

There has previously been opencast and deep mining on this site, but at present it is green belt land made up of green fields, with wet areas and hedges. There are plans to turn nearby land into residential areas, the boundary of one of these areas, Lower Callerton, would border the proposed opencast site. The National Planning Policy Framework, the legislation which controls planning permits, says that in very special circumstances only can green belt be built on, opencast coal extraction can be accepted.

The application site is 8km West of Newcastle to the North of A69 and south of the B6324, Stamfordham Road. The B6324 is a busy road, particularly at rush hour. The site is on the Newcastle/ Northumberland border. Callerton is 885m away, North Walbottle 900m away, Darras Hall 1.3km away; Throckley 500m and Heddon on the wall is 2.2km away.

Extensions are likely given that Banks say that, “ a large resource may be available on land surrounding the proposed site boundary,”1

Banks claim that extracting the coal from this site prevents a risk of “secondary sterilisation”. This means the company is concerned that housing developments going ahead nearby would mean that planning is never given for opencasting on this site, so Banks wanted to opencast the land before the houses were built.

There are lots of post medieval mine shafts on the site that are of archaeological interest. Historic colliery waggonways are present on the site.

Banks say that it would transfer staff from its other sites covering most of the professed 50 jobs. Banks have exaggerated claims of job creation on other sites, such as Rusha where the planning application said there would be up to 57 jobs, in reality there were only at most 39.2 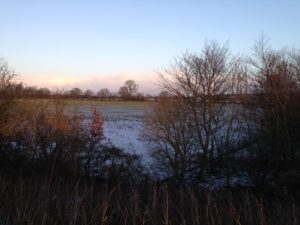 Banks says that it has enhanced an adjacent former opencast so now there are otter in the Dewley burn. Banks’ preliminary report say that there are two otter holts on the site, one of which they say is “likely disused”. Water vole are also possibly in residence.

Environmental surveys would need to be completed before a full planning application can be submitted.

Fire clay could go to brick works in Throckley from the site. Sandstone could potentially also be extracted.

Some areas of the site were historically opencast. As a result Crescent farm and Fell House Farm have weak/average ecological value. 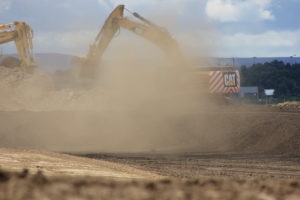 Banks say, “the potential to create air quality effects”. The mounds of earth created to screen coal sites create dust from blown off soil when they are created and removed, coal dust from blasting lands nearby, diesel vehicles on site and increased lorry movements damage air quality.

Banks say it will use measures to improve air quality, such as, keeping operational areas damp with the use of mobile water bowsers and only tipping loose material when the correct conditions prevail (ie. Avoiding dry windy conditions).

There have been occasions where this hasn’t happened at Bradley in the Pont Valley.

Banks acknowledges that previous surface mining has the potential to impact upon soil quality.

Catchment area for Ouseburn and Dewley Burn are on the site. Contamination of watercourses could affect the rivers these tributaries feed into. Watercourses exist on site.

Worried about this project? Get in touch with Coal Action Network @CoalActionUK or info@coalaction.org.uk

We were part of a vibrant campaign against Banks’ opencast in Durham and have successfully stopped new opencast extractions across the country. There is plenty that can be done to prevent Banks Group from destroying this area.