Living on the protection camp, against a new opencast coal extraction is thrilling. Everyday new people turn up and bring new insights, food, camp supplies and energy to the camp. There is a constant stream of media enquiries, beeps of support and work to be done. 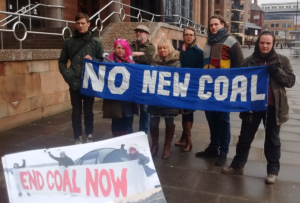 On Tuesday 27th March the camp was taken to Newcastle court where Banks Group was given a possession order. We have been living in the top field, where Banks plan to start an access road which will then enable them to start ripping apart the land at Bradley. It has to start extraction work, after having completed the access road by the 3rd June. We are doing everything they can to delay them.

Banks Group wasn’t expecting our defence to their application for a possession order, nor for us to have been organised enough to have a lawyer representing us. We didn’t manage to get a significant adjournment, which had been our intention, from the court case. However, we certainly made them sweat, while they ran out to their office on the other side of town to grab their missing evidence.

The session was long enough for Banks to be able to solve the issues we highlighted with their case against us, as the court was booked for ninety minutes. The hearing took place in a small court room despite the large number of ‘persons unknown’ living at the camp so not everyone could attend.

The court ruling has no bearing on the opencast itself, only the legal status of the protection camp in the fields. Planning permission was given in June 2015, after a second planning inquiry for this application. Coal Action Network, several local groups and twenty five local people wrote to the Secretary of State for Communities, Sajid Javid in February, asking him to revoke planning permission. The situation with regards to coal in the UK is significantly different now to when planning permission was granted. 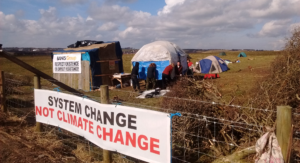 On the day campers were ordered to leave the land owned by the local farmer, a new camp was set up, called “On the Verge.” It’s located on a wide grass verge immediately outside the original camp. This means we continue to have a visible presence and are in the spot where Banks are likely to widen the road for the protected right hand turn into the opencast compound. The land doesn’t belong to the farmer and we are very clear that we will leave this site, taking all structures with us, on the 4th June 2018 once the planning permission has lapsed.

Less than 7% of electricity came from coal in 2017. Two power station have announced closure this year already. The UK government wants to be seen as world leaders, through the Powering Past Coal Alliance and is going to phase-out coal by 2025. The Paris Agreement showed that decisive action is needed to address climate change and coal is the biggest historical cause of global warming. All of this runs counter to starting a new opencast extraction in the Pont Valley.

Sajid Javid refused Banks Group permission to opencast close to Druridge Bay last week (23/03/18). The decision letter says that Secretary of State gave “very considerable weight” to greenhouse gas emissions that would result from controversial coal mine at Druridge Bay. Druridge was refused on the basis of climate change and landscape value, reasons which are equally applicable at Bradley. Sajid Javid can and should use powers under section 100 of the Town and Country Planning Act to revoke planning at Bradley.

How can you help: