The Campaign to Protect Pont Valley was visited 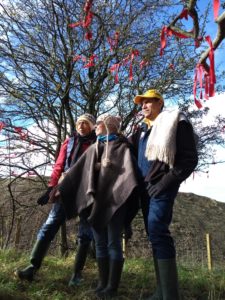 by three special guests from Colombia this week. We hosted Misael, an indigenous leader, Rosa and activist lawyer and Aldo the president of the national coal workers union. We had events in Dipton, Durham Miners Association and Newcastle.

Luis Misael Socorras is a Way’uu indgenous community leader from La Guajira, north east Colombia. Since the 1980’s his village has had to coexist with coal trains rumbling by 24 hours a day, spilling coal dust and noise in to their lungs and dreams. He has seen how the Cerrejón opencast coal mine has ‘invaded’ more and more land since it arrived in 1983, displacing 35 villages in the process. As well as visiting us, he and the others will also be participating in the BGP Biliton AGM in London. BHP are one of the multinationals that owns Cerrejón mine, along with Glencore and Anglo American.

On a grey crisp monday morning in Dipton, wellington boots and extra layers were shared around and we set off from High Stables to walk to the mine. And then we arrived. Because the mine is a mere 295m from peoples home. Our Colombian guests Misael and Aldo, were visibly shocked at how close the opencast was to peoples home. ‘In Colombia, I have never seen a mine so close to peoples homes’ said Misael. They were both very concerned by the impact that blasting will have for local residents homes. Aldo explained ‘At the moment they are going through the soft layer but to get deeper down they are going to have use dynamite. And this mines is too close to peoples homes for this to be safe. Only the mine companies know what their expansion plans are, and if they expand any further you will be forced to move’. 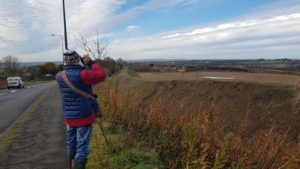 Cerrejón opened one year before the miners strike of 84-85. It was cheap coal from Colombia that enabled Thatcher to break the coal workers union. In the afternoon we met with Durham Miners Association to talk about this historical connection. Ross Forbes, of DMA was keen to know how Sintracarbon had organised as a union and what they had achieved. 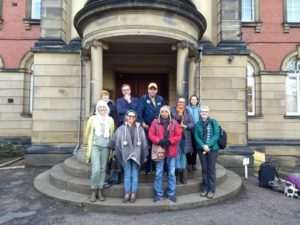 Aldo explained that through ongoing struggle, high levels of unionisation and education his union has had many wins through collective agreements with the company; their children’s university fees are paid for by Cerrejón, their salary rises above inflation, and now every two years, Cerrejón has to transfer 200 fixed or temporary contracts over to permanent contracts.

Ross said ‘This is very impressive for a union that is only 30 years old. In the first thirty years of the UK coal miners union in the UK it was very slow with workers educating themselves.’ He asked how communities and workers fight together?

Aldo said ‘ When we were a new union we just focused on workers rights. As we matured we began to listen more to the communities, to learn what was happening to them and now we are committed to defending workers and communities. We made mistakes before. But now we only want mining which does not harm communities or the environment. It is true that when we speak out against the company in defence of communities, Cerrejón’s attitude towards us as a union changes, but we are not going to let that stop us saying what is true. At the evening event in Newcastle, Aldo added that it is important to note that the communities also support the union.

Misael repeatedly spoke about his concern for the people of Meadomsley and Dipton. At the Newcastle event he said “The mine in Dipton that we saw this morning is just the beginning. It is going to keep growing and as it does it is going to mean that you are going to be forced to leave your homes. But it is not too late for you to stop this happening. You must keep fighting.” 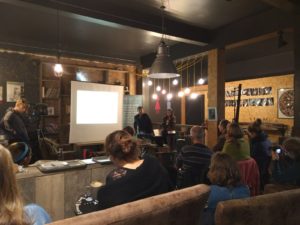 This is what he has had to witness in his homeland, La Guajira. Cerrejón one of the largest opencast mines in the country began like this too. “If we had had organisations like yours, when Cerrejón arrived in the 1980s they would not have been able to opencast in La Guajira. But they tricked and lied to us. They have not fulfilled any of the promises they made to us. Instead they have violently evicted people from their homes and contaminated our water. ”

La Guajira is a semi arid region with one river – the Rancheria river. The union and communities formed a defence committee and with national and international support have managed to date to stop Cerrejón from diverting the river. Under the river is 500 million tonnes of coal. So now the company is trying to starve the river, by diverting its tributaries. The current struggle is to protect the Bruno tributary river and the dry tropical forest in its catchment area. Rosa Maria is part of a lawyers collective who works alongside communities trying to stop the expanision of the mine.

Misael spoke repeatedly about the cultural and spiritual pollution in their territory. This stood out for Suzie Leigh from Dipton, County Durham. She said ‘It made total sense but it wasn’t something I had thought about before. I wonder how it affects those of us living in this area.”

These are just a few flavours of what was an incredible day, full of much rich exchange. Many others will have their own story to tell of the day and we hope this is just the beginning of collaboration and solidarity between us all, with the support of London Mining Network.

Julia Triston of High Stables, Dipton to end said “Rosa Maria and myself were really struck by the universal similarities of our situation. We all have the same questions and concerns and anger whatever our ethnicity, location, language, gender, beliefs. I get angry at the need for so called ‘experts in our struggles If you add up all the years everyone has of living in the valley, this is what counts as really knowing the valley. This is the same experience as the people in Colombian villages. Making these personal connections has been so important for me. Those stories. Us people. Solidarity. ”