Activists from the UK joined others from across Europe last weekend (24th June) to participate in ‘CODE ROOD’ (Code Red) the first announced mass civil disobedience action for the climate in the Netherlands. 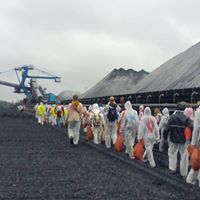 Over 350 participants in CODE RED and blocked one of the two coal terminals in the harbour for the day. The terminal belongs to Coal Transport Bulk Terminal Amsterdam (OBA), the other belongs to French power company EDF. The action thus had a direct effect on the production of fossil energy.
The activists occupied all of the major machinery including several cranes, made music and played frisbee between the mountains of coal. The terminal was completely shut down for the day. 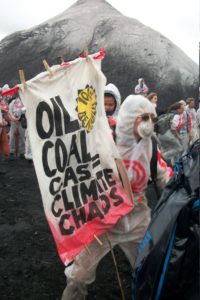 Amsterdam harbour is a key link in the chain between coal extraction and where it is burnt. Coal is imported to Amsterdam from Colombia, South Africa and Russia, amongst other countries. Where ever coal is extracted there are conflicts between mining companies and local people. When mining occurs dust pollutes the waterways, ecosystems are destroyed and people are displaced. The UK, the Netherlands, Germany and many other countries energy systems involves this damage.
Spokesperson for Code Red Maarten said “It is clear that the government has neglected its responsibility to combat dangerous climate change. We have waited a long time for concrete climate action. It is now up to us to accelerate the energy transition.”
For many of the people participating in the action it was their first civil disobedience action.
“It made me feel very strong,” says one participant. CODE RED has empowered many people who previously felt powerless against climate destruction to commit to decisive action.
The police kept away when activists entered the site and were barely around throughout the day. They did arrest eight people trying to access the coal power station which is fed by conveyor belts from the coal stock yards and the last three people to leave the site. These people have remained anonymous in custody and are still detained by the police state.
The participants in CODE RED left the grounds of the Coal Transport Bulk Terminal Amsterdam (OBA) at half past six through the main entrance. It was a triumphant close to a day of action by the Dutch climate movement. Maarten 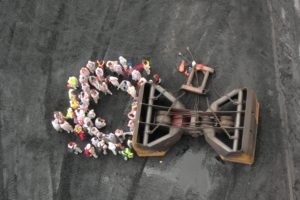 : “This battle has been won, but we have not yet won the fight against climate change. We will continue to pursue our actions until our goals have been achieved. Oil, coal and gas must remain in the ground.”
Today’s action is timed to coincide with the two-year anniversary since the Dutch courts delivered a historical verdict in the climate case brought by D 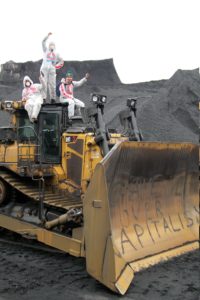 utch citizens and Urgenda. The Dutch State was ordered to protect its citizens against the dangerous effects of climate change by taking measures to significantly reduce its CO2 emissions – specifically 25% reduction by 2020. As there are not any effective measures being put in place to achieve this, we as citizens are coming into action.
The port of Amsterdam is the largest gasoline port in the world and the second largest coal port in Europe. The port of Amsterdam has decided to close its ports for coal by 2030. That is too late to keep climate change within the agreed limits. “We demand that the port of Amsterdam quickly closes its doors to coal, oil and gasoline. The Netherlands must start the transition to a sustainable society to limit global warming to 1.5°C,” spokesperson Harriet said. “We also think it is important that there be a fair transition fund for workers in the fossil industry and other sectors affected by the energy transition.”
The camp and action were amazingly well organised. People from a wide range of backgrounds were welcomed and included without watering down the politics of the camp and the clear links between capitalism, resource exploitation and human rights.
The action group CODE ROOD is part of a worldwide citizens movement against climate destruction by the fossil fuel industry. People are stopping coal-stations in India, pipelines in the US, brown-coal mines in Germany, fracking in Brazil and oil-drilling in Nigeria.