Hargreaves has announced it will be closing both its UK opencast mines by July 2020.The Field House mine in Durham was expected to produce coal until August 2020. Hargreave’s  House of Water opencast in East Ayrshire produced ‘speciality coal’ for use in industries outside of power stations.

Banks Group are continuing to operate the Bradley opencast in the Pont Valley, Durham despite Covid-19.

There has been no decision announced regarding Banks Group’s Druridge Bay (Highthorn) application. Robert Jenrick is said to have made his decision but the timing of his statement is affected by the corona virus pandemic.

Drax power station has announced that it will stop burning coal by March 2021 after almost five decades as one of western Europe’s most polluting power plants. Sadly the last two units are being replaced with another polluting fossil fuel, gas. Much of the wood which it burns comes from the clear-felling of biodiverse forests in Europe and the Southern USA which are home to many rare and endangered species.

EDF are reviewing the future of its West Burton power station, after the governmental support through the capacity market payments stop in September 2021. West Burton burns coal from Banks Group’s opencast mines in the North East of England, as well as imported coal.

Kilroot coal and oil power station in Northern Ireland is going to be converted to gas. No timeline for the end of coal use has been announced.

At Ratcliffe on Soar power station the owner Uniper plans to turn the power station into an incinerator for household waste and produce heat and electricity. There is no planning permission for this yet. United Kingdom withouth incineration network (UKWIN) highlight the problems with incinerators including air pollution and climate change, with a campaign against an incinerator at Ratcliffe.

The alternative fuels proposed at Ratcliffe, Kilroot and Drax would result in slightly lower greenhouse gas emissions and not require coal mining. However, these changes are not solutions to the climate or air pollution crisis and they involve building new infrastructure reliant on combustion leaving us dependent on fossil fuels or high levels of domestic waste.

Coal phase-out In early February the Prime Minister said that the coal phase-out could be brought forward from the end of 2025 to October 2024. This is not soon enough for communities at the front-lines of fossil fuel extraction.

Reduced demand for electricity due to the covid pandemic means that no electricity has been generated from coal since the 10th April 2020. 55 days and counting at the point of writing (4th June 2020).

The existing mines, by company are: 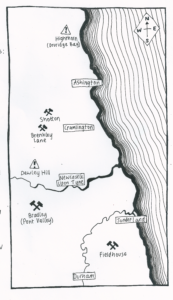 Highthorn (Druridge Bay), Northumberland. This application was approved by Northumberland County Council in 2016. Central government then over turned the decision in 2018. This was appealed and a new decision is still awaited.

Dewley Hill, on the outskirts of Newcastle, the planning hearing has been delayed by Covid protections.

Extension at Bradley opencast (see above).

Proposed underground mines West Cumbria Mining have amended their application for the land aspect of a new underground coking coal near Whitehaven in May 2020. If constructed this would produce coking coal for export for 50 years. Cumbria County Council will decide the application in July 2020.

New Age Exploration (an Australian company) are applying for licences for an underground coking coal mine at Lochinvar, on the border between England and Scotland. If constructed the company hopes to be producing coal until 2044.

There is already more coal above ground than the UK government predicts will be consumed if coal were phased-out in 2025. We don’t need to extract or import any more. This is especially so, if the phase-out date is brought forward.

The photograph above shows Shotton opencast in late May 2020. Coal production has ceased. Coal is still processed and stockpiled from this mine and from Bradley opencast. In the background are one of the overburden mounds.