We’ve been working with communities against opencast coal mines and UK power stations for a whole decade. To celebrate we’re looking at our achievements a year at a time. 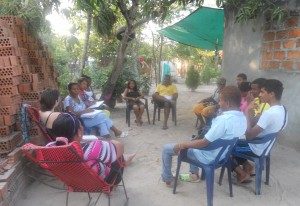 Coal Action Network visited one of Colombia’s coal mining regions. “The mines invade our culture. They bring workers from elsewhere and don’t employ local people because we have not had the opportunity to train.

Young people say they want to work in the mine because of the money. The mines want young people to work there because they have less health problems. But they sack them if they get ill. And when they leave they have lost years from their life,” says Nubia, Las Cruces too close to Drummond’s mine.

The second inquiry into the Bradley (Pont Valley) opencast dominated three weeks of many local people’s time. It was clear there was no community consent and that the coal company was on its knees. This application was approved in June 2015. 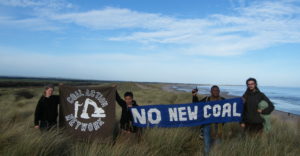 We’re asking supporters to donate to our current legal fund for two court hearings against Banks Group and its mine in the Pont Valley. If you can help we have a crowd funder here.
We continued our international solidarity hosting the Dirty Coal tour in Northern England with visitors from Colombia and Indonesia. This included evening events and a visit to Druridge Bay, site of another proposed opencast.

In 2013 the main targets of Coal Action Scotland Scottish coal and ATH Resources collapsed. This left a number of opencast coal mines stranded with no money for any attempts at restoration and communities fighting for justice from a system which allows mining companies to extract resources, make money and leave the mess to be fixed by the council or abandoned. 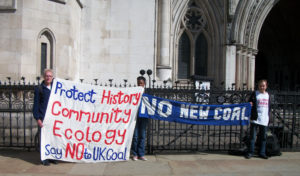 he Varteg opencast in South Wales was rejected after a relentless community campaign.

UK Coal refused to accept the inspectors ruling against their proposal to opencast at Bradley (Pont Valley) taking the case to the High Court where we demonstrated, sadly the judge ruled in the coal company’s favour and there was a second inquiry.

An extension to St Ninnian’s in Fife was approved which included the draining Loch Fitty. 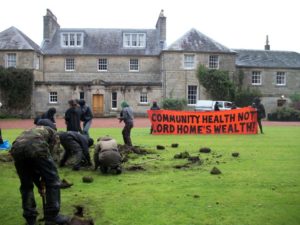 2012 saw Glentaggart East occupied for an action camp, Take Back the Land. There were three successful actions, including a mass trespass of the Mainshill opencast; a blockade of the then largest UK opencast – Broken Cross; and Lord Home, the hereditary peer who profited from opencast coal mines on his land, had his garden opencasted by campaigners.

2011 During this year there were 43 new opencast coal mines in the planning system. 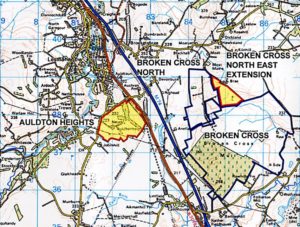 A new coal power station Hunterston in Ayrshire was rejected. Two opencast mines were rejected, Auldton Heights in South Lanarkshire and Bradley in Durham (this was appealed twice and is now operational). The Minorca opencast in Leciestershire was approved and the Huntington Lane protest site evicted.

Coal Action Scotland organised an outdoor skillshare, sharing learning from the camps at Mainshill and Happenden Wood which have then been used on different sites against coal and other ecologically destructive projects. 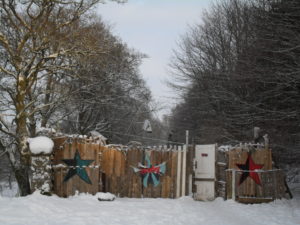 Coal Action Scotland (CAS) was evicted from Mainshill after a long protest camp set up in August 2009. The eviction took five days and 45 people were arrested costing the coal company thousands.

CAS went on to occupy a potential new opencast site Happenden wood to create a base in the expanding coal extractions of South Lanarkshire.

2009 Saw the coal Caravan where a group of around 50 people who cycled from Nottingham to Cambois in Northumberland, visiting existing opencast coal mines, proposed opencast extraction, existing power stations and ending at a proposed power station. Events were held to raise awareness of the presence and dangers of opencast coal mining and coal’s contribution to catastrophic climate change. 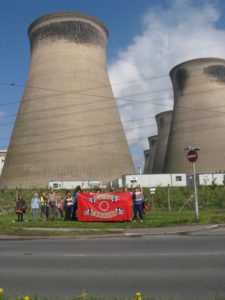 In the summer the Scottish Climate Camp took place at Mainshill were an occupation had started to try to stop the increasing in opencast coal mines in the region.

Lodge House was occupied for a day with a handful of arrests.

Coal Action Network was set up in 2008 following a workshop at the Earth First! Summer Gathering. This followed the Bodge House squat of a farm house due to be demolished on UK Coal’s Lodge House site near Smalley. It was also the year of the Kings North Cl 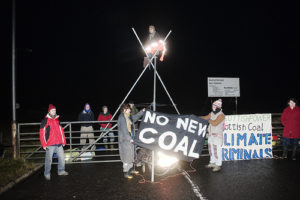 imate Camp. At the time there was a plan for another six new coal fired power stations, which were expected to be Carbon Capture and Storage ready, although the technology at scale didn’t exist.

Coal Action Scotland occupied the Ravenstruther Rail Head Terminal for the first time. The rail head takes coal from the opencasts in the area to the power stations in England.

We’re honoured to have spent ten years fighting with committed communities across the UK and abroad. These local groups have done much more than CAN has to ensure the demise of the industry and the protection of the communities and ecology living where coal extraction is proposed. Our role has been to work with different groups, share their learning and keep an eye on the national picture.

Want to help us to continue our work? We’re asking supporters to donate to our current legal fund for two court hearings against Banks Group and its mine in the Pont Valley. If you can help we have a crowd funder here.