Bradley opencast – the story so far

Banks Group intend to opencast coal mine at Bradley this spring

Banks Group plan to start a new 550,000 tonnes coal mine at Bradley in the Pont Valley, County Durham.

Planning permission was originally granted on the 3rd June 2015 to the now liquidated UK Coal. The site is currently agricultural land in between Dipton and Leadgate, Durham, UK. This is a highly contested site with really strong and well orchestrated opposition from local people.

Banks Group currently operate Shotton and Brenkley Lane opencast coal mines in Northumberland. England’s largest opencast coal mine Shotton is due to close this year. It is awaiting a decision by the Secretary of State for Communities and Local Government, Sajid Javid, on its controversial application to mine at Highthorn on Druridge Bay in Northumberland. The decision on the Highthorn application is due by March 4th 2018. 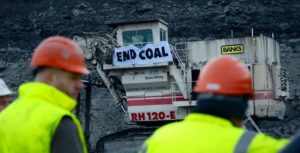 The planning permission for the Bradley site runs out on the 3rd June 2018. If work commences they have 27 months during which coal extraction can take place.

Since planning permission was granted the situation with regards to coal and climate change in the UK has altered significantly.

The planning Inspector who approved this application said that the “Within [the National Planning Policy Framework] NPPF, coal is identified as a mineral of local and national importance and one which is necessary to meet society’s needs.”

Since this announcement was made things have changed significantly.

Protest against Banks on the Bradley site

History of the application

This application was unanimously rejected in February 2011. The Councillors for Durham Council called UK Coal “thugs,” “vandals” and said they were trying to bribe them with their promises of sorting the local roads.

In Autumn 2011 there was a three week appeal which UK Coal lost. The coal company took this to the High Court in London who said that the decision was perverse and ordered another appeal.

The second appeal happened in Autumn 2014 and lasted three weeks. Both appeals were well attended by local people, tens of whom spoke out against the mine with incredible passion, dedication and knowledge.

The Coal Action Network have been working since local residents against this mine since 2009, including giving evidence at the planning appeals.

Banks seems determined to be the last company extracting coal in the UK. It is entirely disregarding the local people and the evidence that there is no need for this coal.

This is not the end of the battle. We are determined that this piece of rural Britain will never be dug up. We need to stand together to protect the livelihoods, families, local history, quality of life, homes, air quality, tranquillity, health,wildlife and ecosystems in this area. Even with planning permission the fight is not over.

Come to our outdoor skillshare 26th Feb to the 1st March in Dipton. We will be skill sharing and running workshops about outdoor life and resistance techniques to protect this area from a new opencast coal mine. From mass catering to foraging wild foods, from land defence to climbing trees and everything between; come and learn new skills, meet new people including locals residents and share your experiences with others.