What happened on Aberthaw beach

On Saturday (January 28th) Aberthaw power station stopped vehicle movements on their only access road to the power station.

145 people came to a demonstration on the beach in front of the power station. It was organised by Reclaim the Power, United Valleys Action Group, Bristol Rising Tide and Coal Action Network. People gathered to demand that Aberthaw power station close and that jobs are found for the current highly skilled employees in the green economy. After a rousing rally with music and food on the beach, the gathered crowd walked to the main entrance of the power station.

We were met by a complete lack of vehicles on the main access road to the power station. Normally there are HGVs and other vehicles on this road every couple of minutes. On Saturday none were seen between 12.30 and 3.30pm and potentially there were none all day. The power station knew that the demonstrators were coming and may have cancelled all deliveries and the removal of coal ash in anticipation of direct action.

This is the fourth of a series of actions against the power station, the previous one was a demonstration at RWE npower, who operate the power station’s head quarters earlier in the same week.

Marianne Owens from the PCS union said, “It’s working class people who suffer from this dirty energy,” as she addressed the crowd from the sea wall. She demonstrated that moving to green energy would create more jobs than exist in the fossil fuel industry. 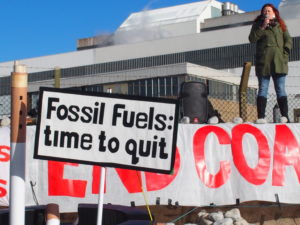 Anne Harris, from the Coal Action Network said, “Saturday’s demonstration at Aberhaw power station sent a clear signal to its operators RWE npower and the government, that the public demand that this power station is promptly closed. Children, working people, pensioners, Welsh people and those from as far away as Machylleth and London gathered on the beach, under the sea wall before walking to the power station main entrance, where vehicle movements were stopped by the power station operators.”

There were a number of angry local residents at the demonstration. They feel like they’ve been sacrificed to this power station, as highlighted by this comment on the Coal Action Network’s web page about the protest local resident. Roy Shropshire said, ” We have lived in Rhoose for almost 40 years, complained many times to the EPA/NRW [Environment Agency and National Resources Wales] of what we considered to be unacceptable levels of pol[l]ution. We have never been informed that this pollution was dangerous. Especially, the fact that we have made it clear the fall out has been over, around and inside our property when the wind blows form the power station in our direction. Clearly, there has been a failure to inform us of the known dangers and a disregard to our health and well being. Clearly, those responsible should now be made accountable.”

RWE kills 400 people a year, 67 of them in Wales as it pumps out huge quantities of toxic nitrogen oxide. The government lost a case at the European Court of Justice for allowing the power station to poison so many people. UK government had given RWE npower an exemption to EU air quality rules, which should never have been granted.

RWE has previously said it intends to address the issues of air pollution, but as Chris and Alyson Austin said on Saturday, “no amount of deaths from this dinosaur of a power station are acceptable.”

Measures being considered early last year included reducing the power stations operating hours; off-shoring the issues of opencast coal mines by importing coal, most likely from Russia and Colombia as less NOx is produced when this coal is burnt, and scrubbing the nitrogen oxides from the emissions. More efficient NOx removal has been ruled out by the power station as it is more expensive than the quick fix Aberthaw want.

All of the protesters at Aberthaw on Saturday agreed on the most important cause of action, close down Aberthaw without delay!

The next protest will take place outside of Department of Business, Industry and Industrial Strategy in London on 8th February. The government are currently running a coal phase-out consultation, where they propose closing the power stations like Aberthaw in 2025. Coal Action Network and our international partners think that this is too slow for the coal-field communities and demand Aberthaw and the other ancient coal power stations close sooner.