Coal Action Network protested outside of Lloyd’s of London AGM 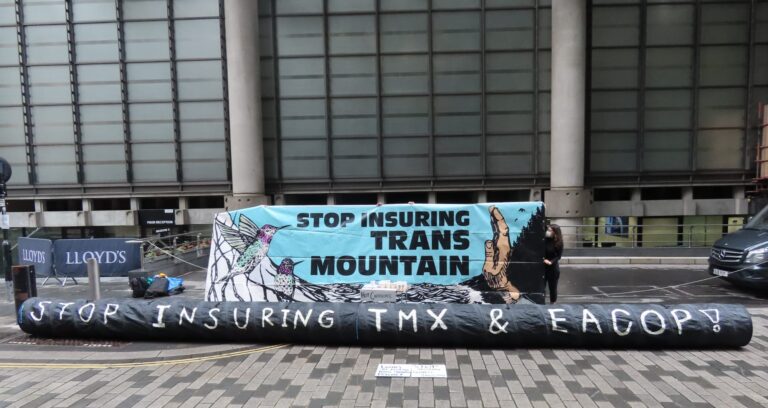 We built a fake pipeline outside Lloyds of London. Through previous actions outside Lloyds of London, we know that there are many sympathetic staff who do not support their workplace insuring the expansion of the Trans Mountain Pipeline and the East Africa Crude Oil Pipeline. Therefore we are asking staff to sign an open letter to John Neal, CEO of Lloyds of London. The letter demands that he make a clear statement that no Lloyd’s syndicate shall renew or provide insurance for TMX or EACOP, and implement a policy to stop the underwriting of fossil fuel expansion and other carbon-intensive projects by all members of the Lloyd’s marketplace.

The TMX pipeline carries diluted bitumen, which is a fossil fuel and the expansion of it leads to further climate catastrophe for local communities and globally. The proposed expansion would transport an additional 590,000 barrels of oil daily, tripling its current capacity.

An increase of this scale cannot be justified at a time when leading scientists have made it clear that there is no room for any additional fossil fuel infrastructure, nor considering the devastating impacts of tar sands specifically. To meet the urgency of the climate crisis, we need to unite together and take action to increase the pressure like never before. In the run-up to Lloyd’s of London’s AGM we have been asked to help indigenous Land Defenders in Canada to cut off insurance to the Trans Mountain Pipeline.

“The Trans Mountain tar sands pipeline threatens my nation and our sacred Sleilwaut (Burrard) inlet; our place of creation. The pipeline poisons our clam beds and violates the rights of many Indigenous communities along its length and at its source. Expanding tar sands extraction and increasing the capacity of the Trans Mountain pipeline network is nothing less than climate destruction,” said Kayah George of Tsleil-Waututh Nation and Tulalip Tribes. “The Lloyd's marketplace and syndicates like Arch urgently need to get the message: it’s time to move away from dirty fossil fuels and instead uplift Indigenous rights, a healthy environment, and a stable climate.”

Campaigning efforts to stop the insurance of the TMX pipeline in 2020 led to three insurance companies cutting ties with the pipeline: Zurich (the lead insurer), Munich Re, and Talanx. We are hoping to build on this momentum to drive away more insurers this year. Already this year specialty insurance and reinsurance firms Aspen Insurance and Arch Insurance have confirmed that they do not plan to renew their insurance of the Trans Mountain Tar Sands Oil Pipeline project when its current insurance policy expires this summer.

The confirmation sees 18 insurance companies that have either dropped Trans Mountain or vowed to rule out insuring the Trans Mountain Expansion Project as climate advocates call for the insurance industry to shore up climate strategies. Lloyd’s of London must follow suit.