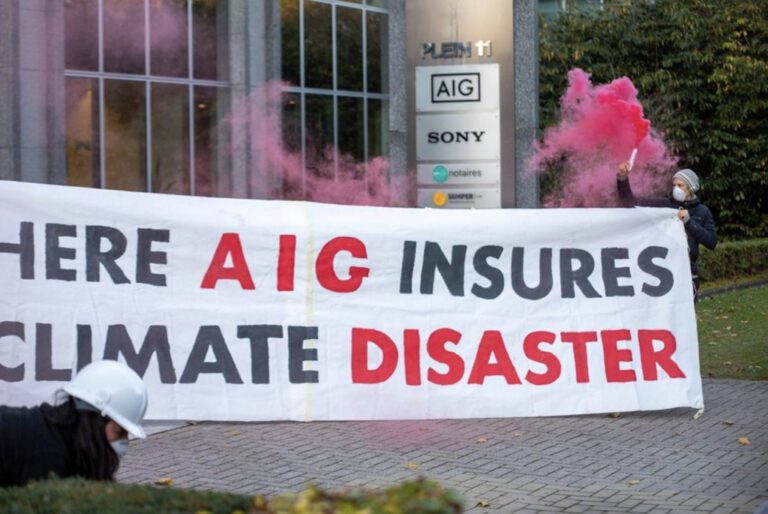 Insurance giant rules out support for new coal, tar sands, and Arctic energy exploration projects and commits to Net Zero emissions by 2050 for underwriting and investments

The commitments, which come after years of pressure from Public Citizen, Insure our Future, and other environmental groups, will also phase out existing underwriting and investments in companies by January 1, 2030 with 30 percent or more of revenue from coal or oil sands, or 30 percent electricity generated from coal.

“As one of the last major insurers without restrictions on coal insurance, AIG’s new commitments to reduce underwriting for coal, tar sands oil, and Arctic oil and gas are a major step forward for people and the planet,” said Hannah Saggau, insurance campaigner with Public Citizen. “AIG has vaulted itself from a laggard in the industry to a leader in the U.S., and we look forward to working with it to meet and improve on these commitments.”

In addition to pumping the brakes on coal and tar sands projects, AIG is also committing to reach net zero greenhouse gas emissions across its underwriting and investment portfolios by 2050 and adopt science-based emissions reduction targets in line with the goals of the Paris Agreement. In the company’s statement, AIG committed to release more information about its phase-out of fossil fuels in the coming months and to provide transparent reporting of its progress.

For over a year, Public Citizen has used direct actions, petition drives, policy advocacy, and behind the scenes pressure aimed at AIG and its CEO Peter Zaffino to demand the company stop supporting the fossil fuel expansion driving the climate crisis.

Today’s announcement marks the beginning of a new chapter in the campaign to improve AIG’s fossil fuel policies. AIG joins over 37 companies that have committed to end or restrict insurance for new coal projects, including Travelers, which recently adopted a policy. Among major U.S. insurance companies analyzed in Insure Our Future’s 2021 Scorecard on Insurance, Fossil Fuels, and Climate Change, only Berkshire Hathaway and W.R. Berkley still underwrite coal with no restrictions.

The new policies could have real impacts on ongoing projects around the world.

Notably, AIG’s commitment makes it the first U.S. insurer to rule out insurance for Arctic energy exploration, which pose grave threats to Indigenous rights and local ecosystems. At least 12 insurers have restricted support for oil and gas drilling in the Arctic Refuge. At the same time, however, today’s release from the company does not clearly define what areas of the Arctic nor what kind of energy exploration activities are covered by its commitment, nor does it implement a broader policy to ensure that all of the projects it insures have obtained the Free, Prior, and Informed Consent of impacted Indigenous communities.

In Canada, in the most recently publicly available insurance certificate, AIG provided coverage for the Trans Mountain Pipeline. The pipeline is a major environmental hazard and a violation of First Nations’ rights, and its expansion project consists of an entirely new pipeline that would ship more than 590,000 barrels per day of highly polluting tar sands crude oil to the coast of British Columbia. While the commitments released today ruled out insurance for the  construction of any new oil sands projects, it is not clear if this includes tar sands transport projects like the Trans Mountain expansion.

“As one of the remaining potential insurers of the Trans Mountain pipeline, AIG’s commitment to rule out insurance for some tar sands projects is a first step but not enough,” said Charlene Aleck, spokesperson for the Tsleil-Waututh Nation Sacred Trust Initiative. “The Trans Mountain pipeline violates Indigenous rights and threatens our land, water, and climate. With the cost ballooning to C$21.4 billion, and the need for more private investment, this pipeline is as risky as ever. AIG must wake up to the significant financial, reputational, and environmental risks of the highly polluting tar sands sector and explicitly rule out insurance for all new tar sands transport projects.”

Written by Insure Our Future