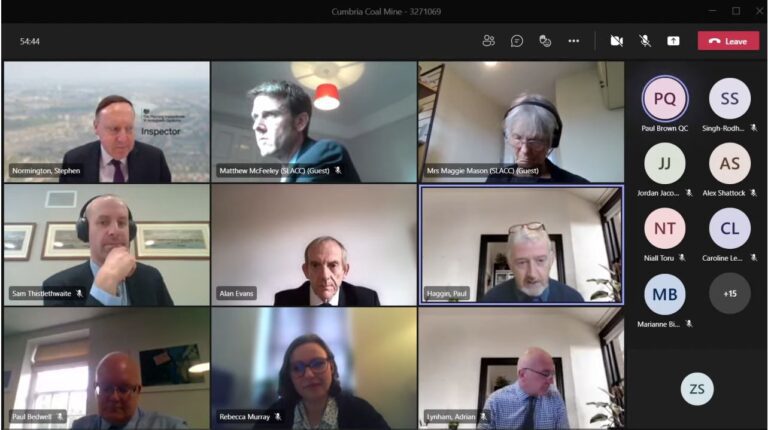 South Lakes Action on Climate Change (SLACC) has been instrumental in the battle against a proposed 2.78 million tonne a year coking coal mine, proposed for West Cumbria.

The group have written this (slightly edited) update for today, the final day of the Public Inquiry.

"It has been an extraordinary 4 weeks. International scientists and climate experts presented evidence against the proposed Cumbrian coking mine on behalf of SLACC and Friends of the Earth, while WCM made almost daily amendments to its proposals and evidence to try and defend its position.

It is clear from the evidence given that the WCM mine will not be "net zero" in terms of carbon, and granting it permission would make it harder for the UK to meet the urgent challenge of climate change

With your help, SLACC has managed to bring together an amazing team of professionals, academics and experts to try and stop the mine. SLACC is a small charity with less than 100 members, but with your help, we have made a coherent and well researched case against new coal mines.  There is no time for delay.

You can watch the Inquiry live on Youtube as the final scenes play out, or scan through each day at your leisure afterwards.

Paul Brown, the Barrister for Friends of The Earth is scheduled to start his Closing Statement at about 1pm. It might be later, because the discussion on planning conditions in the morning may "overrun".

Estelle Dehon for SLACC may start at about 2.30pm, followed by West Cumbria Mining.

Rebecca Willis, Professor in Energy & Climate Governance, Lancaster University has been watching the Inquiry and said today “West Cumbria Mining claims that the planning inspector should ignore the carbon emissions that come from burning the coal from the mine. But the climate won’t ignore these emissions. The UK has a legal commitment to far-reaching climate action, and this mine takes us in exactly the wrong direction.”

The team at SLACC is hoping that we will not be too far "out of pocket" when our last few invoices come in, but are keeping our fundraising page open for now in case!"

The digital inquiry closes today. The inspector will then privately deliberate the evidence presented, write up a report and make a recommendation to the Secretary of State, who is now Michael Gove. In turn Michael Gove will look at the report and decide whether or not the mine can go ahead. There is no timetable released for the completion of the report, nor a date for when the government will make a decision.