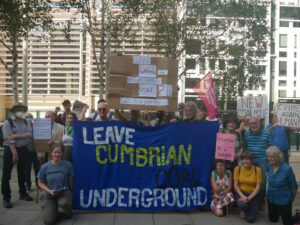 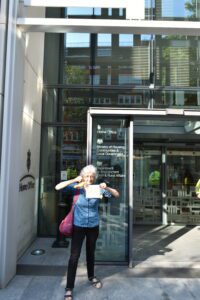 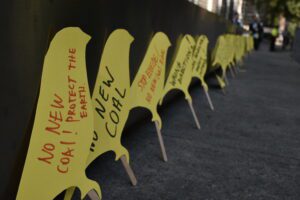 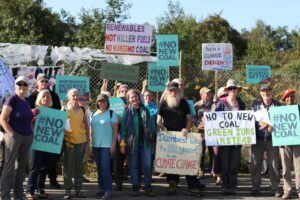 From West Cumbria to London, opposition to the controversial proposal for an underground coking coal mine, sited near Whitehaven, is widespread and growing. On 7th September, the day the public inquiry investigating the proposal by West Cumbria Mining Ltd started, members of the public gather in two locations to demand a greener future, in which a new coal mine has no place.

West Cumbria Mining Ltd want to extract 2.78 million tonnes of coking coal annually that would emit around 8.4 million tonnes of CO2 each year until 2049. Cumbria County Council approved the application, but in March 2021, the government decided it will be the final arbitrator. This was the result of requests from many quarters, including over 113,999 people supporting Coal Action Network's demand the government call in the decision.

Underground coal miners used to take canaries in cages into the mines. The birds would weaken and die when exposed to lethal gasses released by mining, acting as an early detection to protect the miners working deep underground.

Jill Perry from West Cumbria, who attended the Cumbrian rally spoke via phone and megaphone to the concerned people gathered in London. She said, “The steel industry is very carbon-intensive but is making fast strides in weaning itself off coking coal and onto green hydrogen so we don't need this new coal mine, we need to encourage the British steel industry to solidify its future by going green, and Whitehaven to provide a more certain future for its residents by going for green jobs.”

The whole flock outside the Ministry of Housing, Communities, and Local Government to sounded the alarm about the damage approving this new coal mine proposal would do to limiting climate change. Many people are concerned what a new coal mine would do to the UK’s reputation in climate leadership, the government’s net-zero commitment, investment in jobs of limited future prospects, and to steel decarbonisation momentum.

Read the excellent write up of the London rally on Desmog. 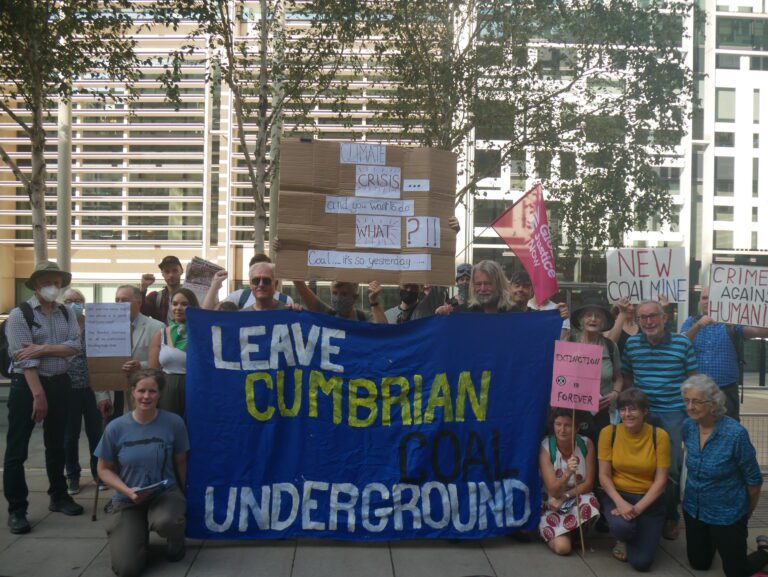