Day of action against Lloyd's of London

On the 17th May 2021, at 08:30am, people across the UK will join us in a day of action against Lloyd’s of London, one of the world's leading insurers of fossil fuel projects. We demand that they stop insuring climate chaos!

Take part in our UK-wide day of action against Lloyd’s of London (no relation to Lloyds bank) and their marketplace insurers of fossil fuel projects on 17 May - the day many will be returning to their offices after lockdown. We need to let the Lloyd’s of London's marketplace know we’re aware of the critical role they and their insurers play in enabling risky climate-wrecking projects from the first day they return to their offices.

How do I get involved?

There are actions outside the offices of fossil fuel insurers all around the UK - check out what's happening near you and sign up to get more info!

What kind of action?

Anything you want - get creative! An old bedsheet and a bit of paint is all you need for a banner. And we'll post you fliers to hand out to insurance staff and the public so you don't have to remember all the facts (email us a postal address).

Can't get out on the streets, or there isn't an action happening near you?

Please help us make a big impact on social media. Check out our social media pack for sample messages to share before the action and on the day.

We’re demanding Lloyd’s of London insurers act now to rule out insuring the Adani (Carmichael) and West Cumbria coal mines, and fossil fuel projects more widely. Lloyd’s of London has so far only said they’re willing to rule out new insurance trades on Arctic exploration, thermal coal, and Canadian tar sands by the end of 2021…but allow the renewal of insurance of even these shameful practices until 2030. That’s an insult to the Paris Agreement and to all communities that will suffer the worst effects of climate change.

Lloyd’s of London marketplace is in the top 4 for insuring fossil fuel projects - and underwrite fossil fuel projects that other insurance companies won't touch, allowing mining companies to take risks exploring and unearthing new fossil fuels that we need to keep in the ground. Insurance is a vulnerable link in the chain needed to start and continue these huge climate-wrecking projects.

Despite being one of the main insurance marketplaces propping up the glob al fossil fuel industry, these insurance trades only account for around 5% of Lloyd’s of London insurance market. That means, with enough encouragement, insurance for all fossil fuel projects—such as the Adani or West Cumbria coal mine—could be banned. Join us in taking action to stop some of the riskiest, climate-wrecking fossil fuel mega-projects in their tracks. 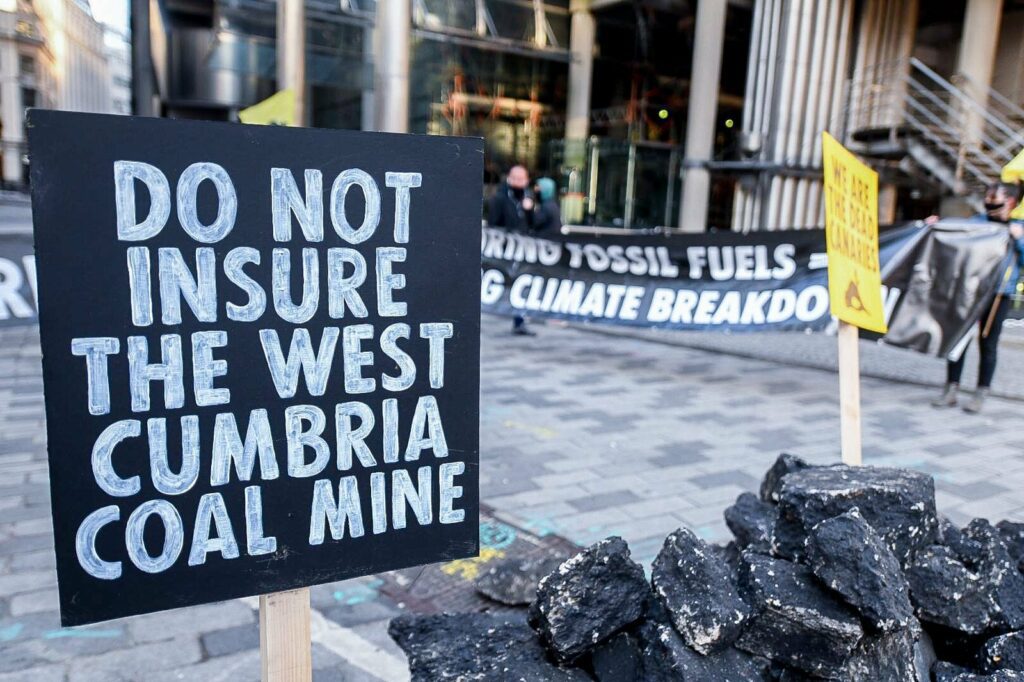