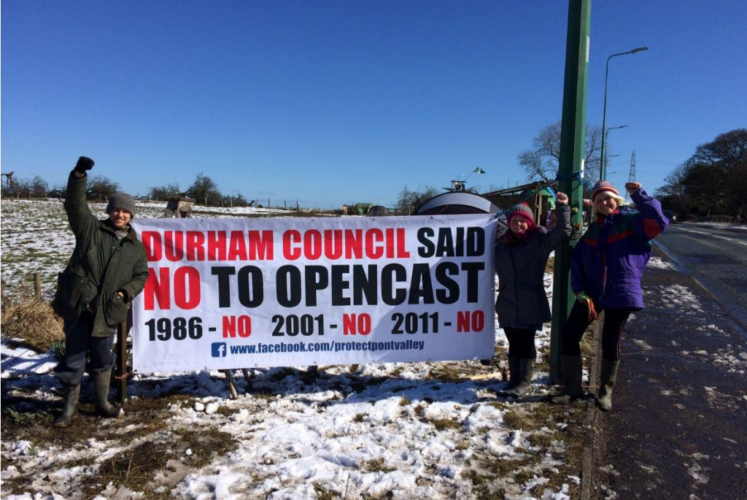 On the 1st July Durham County Council planning committee voted to reject Banks Group's controversial proposal for 'West Bradley' an extension to the current 'Bradley' opencast coal site between Dipton and Leadgate which would have caused another 90,000 tonnes of coal to be extracted over a further 1 year period. Had it been approved it would have added further disruption to people living in the area and worsening the local and international environment.

The written particulars of the decision said, "The proposed development would not be environmentally acceptable with respect to landscape and visual impacts and residential amenity impacts, and could not be made so by planning conditions or obligations contrary to saved County Durham Minerals Local Plan Policies M7a, M23, M24, M36 and M37, Paragraph 211a) of the National Planning Policy Framework and Emerging County Durham Plan Policy 54."

Speaking at the hearing, Alan Holmes of Campaign to Protect Pont Valley argued that approval was inconsistent with Durham's future plans including climate mitigation plans: “The County Durham Plan asserts climate change issues should be considered in every aspect of strategy and decision making. The Officer’s Report recommends no weight is afforded to the emergent County Plan, even though it will form the basis of decision making well into the future.”

“In contrast to the dodgy developer lobbying we have seen in the news in recent weeks, the community groups and individuals who have petitioned, door-knocked, written letters, have managed to convince planners that a coal mine is not in anyone's interest. We applaud the councillors who listened to the community and took the only right course of action in a climate emergency. The impact of this decision will be felt nationally as more mines are set to go before planning committees.”

Banks Group's proposal for another opencast coal site, Dewley Hill near Newcastle, is awaiting a planning hearing date, and has also been countered by a strong community campaign, Defend Dewley Hill.

Coal Action Network & supporters raised funds for the the Wayuu communities of La Guajira, Northern Colombia, who urgently needed our solidarity to respond to the COVID-19 pandemic