Will the UK coal phase-out live up to the hype? That's in our hands…

Last week the government announced its response to the coal phase-out consultation with an overview of how they plan to implement an end to coal by 2025. We look at some of the pros and cons of this plan and whether or not the ‘Powering Past Coal’ rhetoric matches the action…

The top line is that the government have now rejected many pleas to end coal sooner than 2025. For people living with open cast coal mines on their door step, 2025 isn’t soon enough. And for those awaiting a verdict on a new mine, the governments response hasn’t gone nearly as far as it should.
The day before the government response came out, Banks Group declared its intention to start a new open cast coal mine in spring 2018, on land purchased from UK Coal, which had liquidated before the coal-phase out announcement.
The Bradley mine would almost certainly fuel the power stations that the coal phase-out is meant to stop supplying.
A coal phase-out shouldn’t just be about cutting carbon. These mines have devastating long-term impacts on community health and ecosystems, regardless of how long they operate or how they are ‘restored’.
This was yet another coal phase-out publication with no mention of closing open cast coal mines so it’s not clear how the government plan to address this.

Also missing is any mention of restoring the abandoned coal-mines which litter the former coalfields of Scotland and South Wales, continuing to damage and disrupt communities and ecosystems years after coaling has stopped, and there is no reference to what could be done with soon-to-be former power station sites.

The good news is that coal will be excluded from the capacity market auctions for energy that will come online for 2025/2026. So there will be no more government subsidies for coal as back-up power after that date.
What’s disappointing is that coal-fired power stations won’t been taken off the scheme sooner. This will mean four more years of capacity market payments, burning around £500m public money, if past years are anything to go by. Coal should come off the capacity market now.
In addition, the UK government recently argued at an EU-level for subsidies for coal fired power stations to be allowed to continue up until 2035 – missing an opportunity to act on its image as an international leader in phasing out coal.
Whilst it’s good that coal will stop providing back-up power, it means an opening is becoming available for supplying this power to the grid…

You guessed it. Forecasting a ‘need’ for around 7.5 GW of new gas capacity between 2018 and 2025, the government claim that ‘lower carbon forms of energy such as biofuels and gas’ will fill the space left by coal, despite the incredible growth in renewables contribution to the grid in 2017. 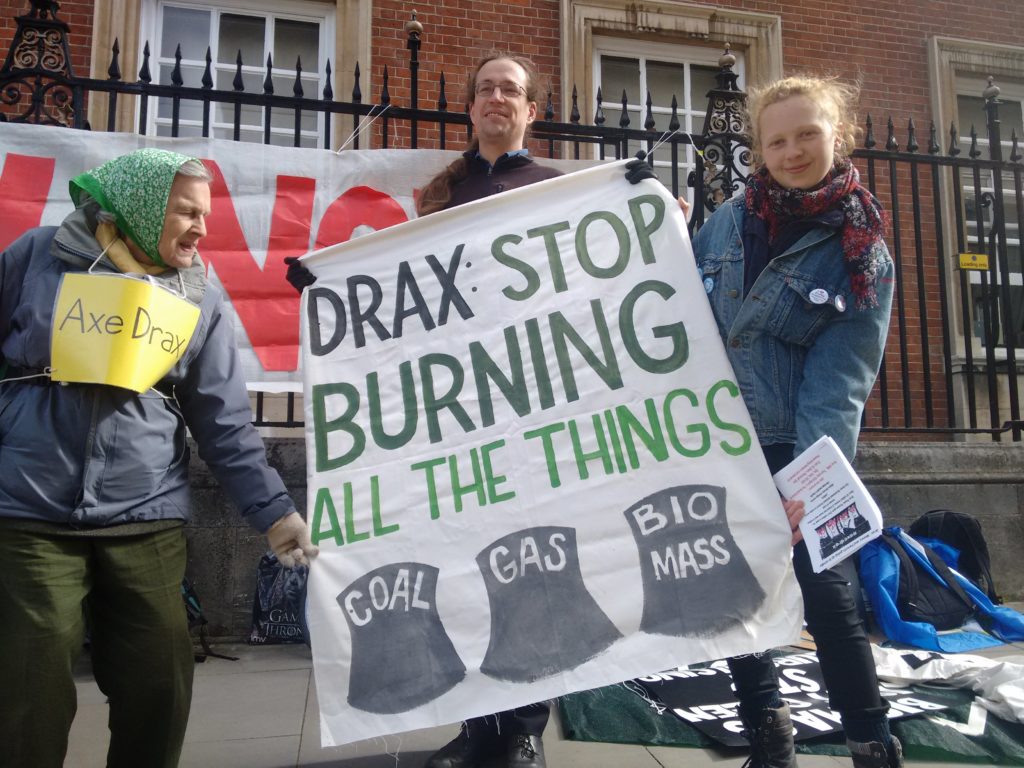 “The government has kept to its commitment to phase- out unabated coal generation by 2025, but we aren’t convinced that this alone merits its claims to global leadership. Not only are other countries imposing more ambitious sunset dates, we are concerned that the door is left wide open for investments in new, long-term gas capacity, locking us into another generation of fossil fuel power. This contradicts the very rationale of the coal phaseout.”

The plan tries to offer reassurance about growth and jobs in a new energy economy. But it does nothing to address the job losses which it admits will occur. It is not enough to say that jobs will be created in renewable energy; this much is obvious by now.
The question is how will power station workers and people all along the coal supply chain benefit from the transition that is already happening? In the original consultation document the only reference to addressing this was, appallingly, improving resources for local job centres; in over a year the ambition for a just transition hasn’t moved on from there.

“A long-held fear has been that power stations will be able to keep burning coal by co-firing with biomass and get subsidies for that in future, too. This is still a risk: power stations can continue to burn coal indefinitely, as long as they co-fire at least 54% biomass in each unit. Biofuels’ net contribution to carbon emissions can often equal that of coal.
Further, the report still suggests that large-scale biomass can be an ok, ‘low carbon’ alternative to coal. So it doesn’t set the right tone on biomass, considering that other countries are looking to the UK for direction on how to approach a coal phase-out.”

So what do we need to do?

– We need to put an end to new open cast coal mines by mobilising against Banks Group.
– At the same time, we’ve got to build a movement against a ‘gas lock-in’, while advocating for alternatives and demand reduction
– To assist this, the government should stop ongoing subsidies for fossil fuels – subsidise renewables instead and radically re-think our demand and the way we use energy in the grid.
– The government need to start listening to the needs of union members and workers who stand to lose from the transition. Those of us campaigning for an end to coal need to set an example by doing that too.

So – while it hasn’t been legislated on yet, it looks like the end of coal is in sight, although not as soon as it should be.
Our actions can still help determine whether or not an end to coal will really help us move away from a high-carbon energy system and provide justice for communities.