We are honoured to be working in solidarity with indigenous and Afro-Colombian communities in La Guajira, Northern Colombia who have spent decades demanding justice from the companies operating Latin America’s biggest coal mine, Cerrejón, and slowing down the mine’s expansion with legal challenges and direct action. The mine exports coal to Europe and the multinationals are listed on the London Stock Exchange.

Lately, we’ve been collaborting with Nación Wayuu, who focus on the human rights of indigenous Wayuu communities in the remotest northern parts of La Guajira. These communities have been badly affected by the open-top coal wagons that transport coal daily through their territory to the port, to be shipped to Europe. It’s caused health problems, and along with climate change, has made it a near impossible environment to grow food. On top of which, the mine and other extractive industries take large amounts of water, leaving communities dependent on rations from the company, rather than able to grow their own food or have autonomy over their basic resources.

Now, due to the lockdown, Wayuu people can no longer travel out of their communities to get essential food and water which is no longer available on their own land. Nación Wayuu have been one of the local groups helping deliver aid to the families in most need. We have supported them with a crowdfunder which is still live.

Indigenous activists in La Guajira are subject to threats of violence and assassination from alleged paramilitary groups. It came to our attention lately that José Silva, organiser of Nación Wayuu, was the subject of rumours about embezzling funds. For indigenous activists in Colombia, rumours can be extremely dangerous. Death threats that incite violence against indigenous leaders often cite rumours of their alleged misconduct as justification. José himself has survived an attempt on his life and was threatened again in December 2019. Last week there was a threatening person following him on a motorbike. This is the daily reality for people who stand up to multinational companies and advocate for indigenous autonomy.

As allies of José and his colleagues, responsible for raising the money that drew this hostile attention towards him, it feels imperative to express why we trust him and why these rumours are dangerous to him and his colleagues. In particular we were concerned that these rumours were not only picked up by, but seem to have originated from, agents acting on behalf of the Colombian police, and we have seen no evidence to back them up. Until now we haven’t heard of Colombian state institutions themselves being responsible for rumours that put activists in very real danger, since they are meant to be keeping social leaders safe. It is a worrying development for all of our allies in Colombia.

Along with other European allies, we sent the letter below (in Spanish and then in English) to Colombian state institutions that have been implicated in this hostility and those which are mandated to act to protect human rights in Colombia. Here we publically affirm our continued support for and trust in Nación Wayuu and our admiration for their incredible work.

You can continue to donate to Nación Wayuu’s Covid-19 crowdfunding page. Subscribe to our mailing list to stay up to date with further actions we’ll take to support coal-affected communities and defend social leaders’ right to safety in Colombia.

No Podrán Callar Nuestras Voces /  They cannot silence our voices

José wrote this poetic piece on his recent experiences. 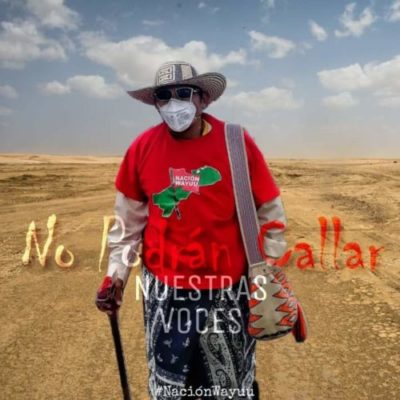