On the final day of the government coal phase-out consultation, we gathered with friends and allies from Friends of the Earth, London Mining Network, Biofuelwatch, Fossil Free UCL and more, in a creative demonstration to say ‘Ditch Coal Now!’

Just days earlier, the government announced further massive handouts to keep coal-fired power stations burning. The government is expected to put £453million into propping up the industry over a 4-year period; causing 2,900 premature deaths per year from air pollution, on top of prolonging the health impacts on local people from the open-cast mines. Not to mention human rights atrocities associated with coal from Colombia and Russia, to be burned in UK power stations.

These government handouts are occurring alongside a supposed ‘coal phase-out’ which they claim will mean we see an end to coal 2025. However, a glance at the phase-out plan reveals a host of loopholes, not to mention an acceptance of the ‘capacity markets’ which distribute the handouts which keep these monstrosities burning.

For those on the front lines of coal extraction, 2025 is not soon enough to end coal. And a plan that funds power stations to keep polluting and causing more deaths every day doesn’t sound like a plan to us.

Despite this, it is possible to imagine that if your job was to engage with energy production in terms of numbers, statistics and economic measures, then the human consequences of burning coal might seem distant and removed. How do you encounter some of that reality when you work in a Whitehall office? 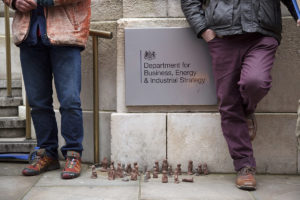 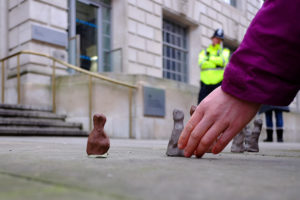 By carefully placing 2,900 small clay figures outside BEIS (Department for Business, Energy and Industrial Strategy), we held a space for those lives which could be saved every year if we ditched coal now.

Handmade by friends and strangers of all abilities in a community in Bristol, which receives some of the impacts of air pollution from Aberthaw power station, the figures became more than ‘just figures’ – they were all unique, each person putting a bit of themselves into each model they made.

We were joined by Seb Munoz from War on Want, who gave first-hand accounts of the atrocities in Colombia associated with UK coal. We heard from the PCS Union about how the movement against coal and Union struggles can unite. Guy Shrubsole from Friends of the Earth told us about the incredible community resistance to opencast mining in Druridge, and we heard from BiofuelWatch about how we could resist Drax, the ‘Goliath’ power station. 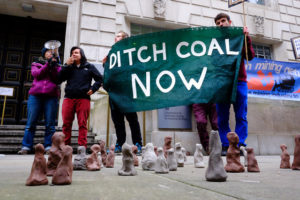 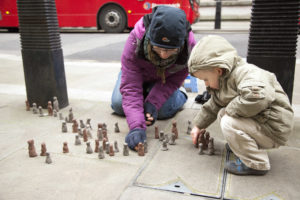 On top of this we shared a unique experience in creating this sculpture with all those who came; who carefully gave their attention to each of these lives, bringing the human consequences of coal into focus for the BEIS employees on their lunchbreak. Department workers who ventured out reacted with curiosity and openness, some were keen to understand and share knowledge, compare information and find common ground.

Despite the uncertainty surrounding the government’s coal strategy, one thing remains clear; the movement to end coal now is creative, dynamic, thoughtful, diverse and determined.