300 metres from houses at High Stables, Dipton, the habitats of protected species are being destroyed to extract coal; fuelling climate change and lining the pockets of the mining company, Banks Group.

We believe we can prove that Banks Group has committed crimes against wildlife, and the government let them continue their destructive project, despite claiming to be ‘powering past coal’.

So far we’ve won public inquiries, camped in the snow, documented protected species on the site and more. We will use all tools available to us to stop the opencast and challenge the power of fossil fuel companies. Flick back through our recent posts to read more about these actions.

We are fighting two legal battles, one against the government for allowing the opencast to go ahead and the other against Banks itself for destroying the breeding grounds of a protected species.

We need your help to raise the funds. Please donate and share our crowd funder.

The Secretary of State provided no reasoning or evidence to justify upholding Banks’ permit, when over 88,500 people signed a petition to support the letter with 25 local signatories and four community groups which put forward detailed arguments as to why it should be revoked. The former Secretary of State for Housing, Communities and Local Government stopped Banks mining at Druridge Bay earlier this year citing the damage that burning this coal would cause to the environment as a main concern.

Update: The Judicial Review will be heard 18th January in Leeds.

One of the local residents is challenging the decision not to stop the opencast in the Pont Valley in the High Court. Support her by donating to our crowd funder.

Update: The Judicial Review will be held in Leeds on the 18th January.

Banks Group paid Argus Ecology to survey the area in 2017. In a court case stemming from the eviction of our camps in April it became apparent that this survey was substandard, the best available technique – pitfall trapping was not used.

Banks Group knew that if protected newts were found to be breeding on the site this year then the opencast could not be started prior to planning running out on the 4th June. A 250m exclusion zone from Brooms Pond would be required to have enabled pitfall trapping and translocation of amphibians to the ponds created for this purpose to the north of this site. This would have prevented work on the access road. 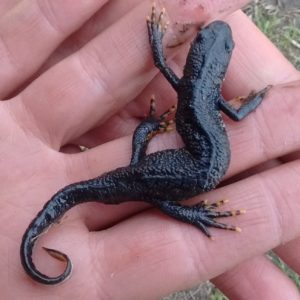 The wildlife crimes relating to the newts and also in relation to ground nesting birds was reported hundreds of times to Durham police. The police failed to investigate properly, leaving us with no choice but to prosecute Banks Group ourselves.

Based on these events we believe we have the stronger argument against the opencast, and against Banks’ ‘Development with Care’ image. National and local government has failed us – we need to take this to the courts.

What can we win?

WIN #1. Stop the coal extraction & save the Valley

Coal extraction has started in one part of the site, but the north-eastern section is not due to be worked until around May 2019. There is still some of the Pont Valley which can be saved. By putting the Secretary of State’s decision to a legal test, we will seek a verdict against the opencast to stop it for good.

WIN #2. A ruling against Banks Group as wildlife criminals

So there can be no doubt that their ‘development with care’ image is a myth. This will help our allies to challenge Banks’ other proposed opencast coal sites in the region such as Druridge Bay. 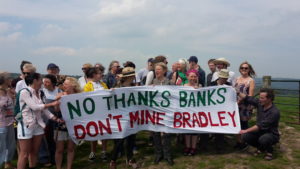 Through this campaign we’ve learned how common it is for developers to cherry pick evidence with the help of an ecologist, at the expense of protected species. Through this prosecution we aim to show that developers can be held accountable and that wider change is needed for safeguarding wildlife in the UK.

With no explanation, they let Banks go ahead in spite of all the evidence, even as other opencasts were called in by the government or failed to win planning permission on the grounds of damage to climate, health and ecology. Without plausible, transparent, well-argued reasons, the Secretary of State cannot claim that this outcome is legally, politically, economically or morally acceptable. They mustn’t be let off the hook, for the sake of other communities fighting opencast and dirty development.

You can help by donating to our crowd funder and asking others to do so too.

How will we do it?

What’s the chance of success?

High for the private prosecution against Banks for wildlife crime; A judge already ruled in favour of the Pont Valley Protection Camp, on the basis that Banks Group couldn’t present sufficient evidence to prove that endangered species were not on the site.

For the Judicial Review holding the Secretary of State accountable; launching it in itself will enforce transparency around the Secretary of State’s decision. The likelihood of getting the opencast stopped won’t be known until we get part way through the process – when a judge will decide whether our challenge can go forward to a full hearing. To begin, we need you to pledge in the knowledge that whether or not we can stop the opencast, there is more we can win for other campaigns against opencast in the process.

If the judge decides that our challenge can proceed to a full Judicial Review hearing, then we will need to set a new target for the next stages and raise more funds.

Donate to our crowd funder

Taking the government AND a corporation to court is a bold move. It’s going to be a new journey with many highs and lows, and we can’t do it without you.

Legal battles are expensive. The success will be determined by how many people are willing to get behind us.

It’s our last chance to save what is left of the Valley – but this is bigger than that. It’s a unique opportunity to set a legal precedent to reign in the power of dirty development and make our government act accountably when there is so much at stake for wildlife and the climate.