Today I got to visit for the first time the beautiful place, called Bradley by Banks mining company,  that lies to the south west edge of the village of Dipton. Snow fell, feet frozen, we got down on our knees to meet some of the rare plants that make up part of this diverse habitat. Plants with hairs to survive the cold, low to the ground, finding a home in these bell pits. Plants that support the rare butterflies that hopefully will have a habitat come the summer. We felt the silt under which the great crested newts are hibernating. 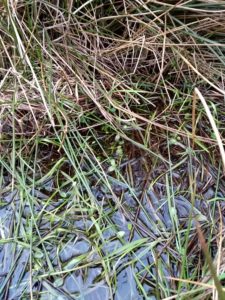 I saw the trees and hedges that Banks felled just this morning. Short and bent over with the cold pennine winds, some have been here for as many generations as the families. For humans who get their food and shelter from bricks and supermarkets, it is easy to dismiss the significance but for some of the birds on this site, these hedges are food and shelter. 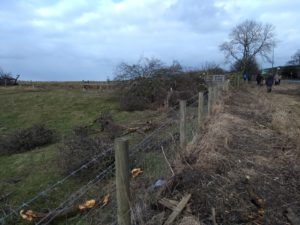 I met and listened to Lea who told me about he use to go pond dipping in the pond as a child, he told me about the routes the newts would make, the woods down below where his grandfather and father worked as gamekeepers and learnt how to work with the foxes rather than needing to shoot them. I got a sense of how everything, contributes to binding the place together. 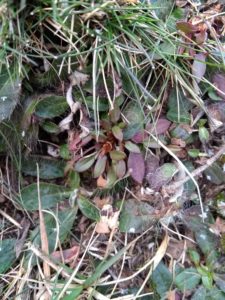 I also felt that words fail to convey what is really at stake in this 11th hour fight to stop Bradley – how peoples lives are entwined with this place.
This evening at the Dipton Social Club we heard from Tom who played in the woods as a kid, dressing up as animals. We heard from Liam who said that even though his family have attachment to the area to be mined, and he opposes it for these reasons, that the site should be protected. We watched a preview of After Open Cast, a short film which talks about how people are fighting for restoration for opencast coal sites in South Wales how their struggle for justice has meant that all new mines must put  money in a pot for restoration before they start digging.
We ended the evening sharing ideas and planning together about what to do now, given that Banks have began to work the site and we are still waiting to heard from the Secretary of the State. 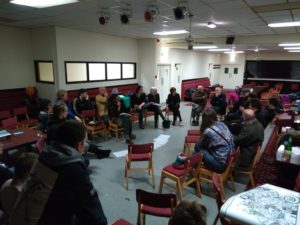 Out walking around the site, i was so awed by the stories, history, diversity that I didn’t feel my feet turn to ice and my nose start t burn as the wind and snow came. I feel sad at the thought of this land being ripped up to be opencast mined, and I have only just met it. I cant begin to imagine what it is like for people whose families have made their home here for generations.