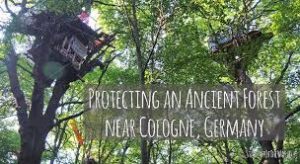 Coal Action Network has been wanting to write about the death in the Hambacher Forest of activist Steffen Horst Meyn. We haven’t been able to, so will republish the media release from Hambi Bleibt.

In solidarity and love with all those who have lost their lives fighting for a better world.

“On Wednesday afternoon (20/09/18) about 3:45 pm, the movement journalist, blogger and activist Steffen Horst Meyn, died in the tree house village Beechtown in Hambach Forest. He crashed while attempting to document an ongoing eviction action by the Special Task Force of Police (SEK), from a suspension bridge from about 20 m height. Rescue workers on the ground tried to resuscitate him. According to our information, however, he died a little later, still in the forest, in a rescue helicopter.

We are shocked and stunned by this tragic event. We deeply sympathize with the family and friends of the deceased and hope that they will get the privacy and peace they most likely need in their situation. For many of us, too, he was a friend whose loss we do not really understand. Especially the people in Beechtown who, after weeks of stress due to the eviction, now had to be present at this terrible accident, we wish a lot of strength and peace. 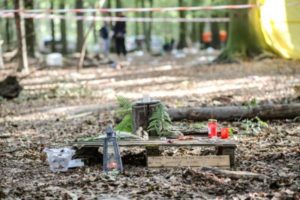 After all the information that we at the press office of Hambach Forest have been able to gather so far, it is clearly a tragic accident.

It would have been a worthy handling in our eyes if all sides would keep a low profile for the time being. On this day, in a reaction of the Interior Ministry and the police, the voluntary exit of tree houses was required. In this situation we consider that as an absolutely inappropriate strategic use of the death.

In the communication about the occupation, and now also about the accident, the government of North Rhine-Westphalia and the police also fall back upon false reports. Actually, we would have wished we had not yet to speak on a political level about the accident. Unfortunately, after the spread of untruths and the disrespectful attempt to instrumentalise Steffen’s tragic death, we now see ourselves forced to make a few corrections.

1. At the time of the accident, police and evacuation forces were deployed on spot in Beechtown. We are linking here corresponding footage and photo material. (Trigger warning: https://bit.ly/2xyVOy5) It is incomprehensible to us how the police can claim the opposite.

2. In six years of almost uninterrupted tree house occupancy, this is the first and only comparable case. For six and a half years, the treetops were inhabited, people climbed daily up and down and moved between the trees without a comparable case having occurred so far. That the state of North Rhine-Westphalia, the police and RWE are now trying to exploit this tragic accident in order to justify the alleged necessity of this violent eviction, we consider unworthy and a mockery of those affected.

3. The question that accompanies us all these days is the question of ‘why?’. For weeks, the Hambach Forest has been besieged in order to get to the underlying lignite. It is no coincidence, in our view, that this first fatal accident in the history of occupations took place right now, during the eviction. 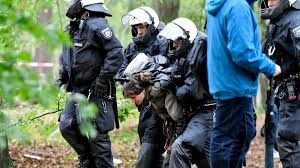 Everyone in the occupations stood for several weeks under constant stress because of an eviction campaign, which was beaten through at an insane pace. Constant noise from expulsion and clearing, day and night floodlights and flashing blue lights, massive police presence on the ground, sonication with barking dogs and recordings of chainsaw noises, as well as the news about the repeatedly life-threatening approach of the task forces, leave physical and mental traces in all involved. Insomnia, stress and over-stimulation are poisonous for the attention and tranquility essential for safe tree climbing.

According to our information, there is no direct connection with the acute local police action at the time of the accident. But we know first-hand that the deceased only climbed into the trees because he was permanently prevented by the police from doing his press work on the ground.

“ After the press was often restricted in their work during the last few days in the Hambach Forest, I am now 25m up on Beechtown to document the evacuation work. There is no barrier tape up here.” (https://bit.ly/2MPh6NB)

Also the government of the federal state of North Rhine-Westphalia, the police and RWE should also take a deep breath these days and reflect. The attempt to blame alleged safety deficiencies in the constructions is a transparent strategy in this situation and absolutely inappropriate.

What we need now is peace for the necessary mourning. It is not enough to suspend the concrete expulsions until further notice. The night after the accident, Beechtown was still lit with a floodlight system and sonicated with barking dogs. The forest is still full of police forces that we only experienced as aggressors in recent weeks and years. The lifting platforms, eviction tanks, water cannons and chainsaws are still in the forest and waiting for their use. This is not a considerate pause.

What is needed now is an immediate withdrawal of the police units and a stop to the expulsions and felling. The forest and 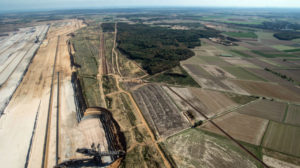 the people need rest to handle this accident. In addition, the police should fundamentally reconsider their deployment strategy and the manic pace of eviction.

There have been too many incidents in recent weeks that have put the health and lives of activists at risk. The freedom of the press was massively restricted during the whole mission. Safety-relevant material such as climbing ropes, climbing harnesses and fire extinguishers were systematically seized or destroyed in large quantities. And of the people in the trees was expected a mental, emotional and physical burden by this massive presence, which is not reasonable for safe climbing nor for the processing of a death.

All this has to stop. Therefore, we demand an immediate total calling off of the operation and the release of all prisoners.
Mr. Weinspach and Mr. Reul: Let us grieve in peace.”